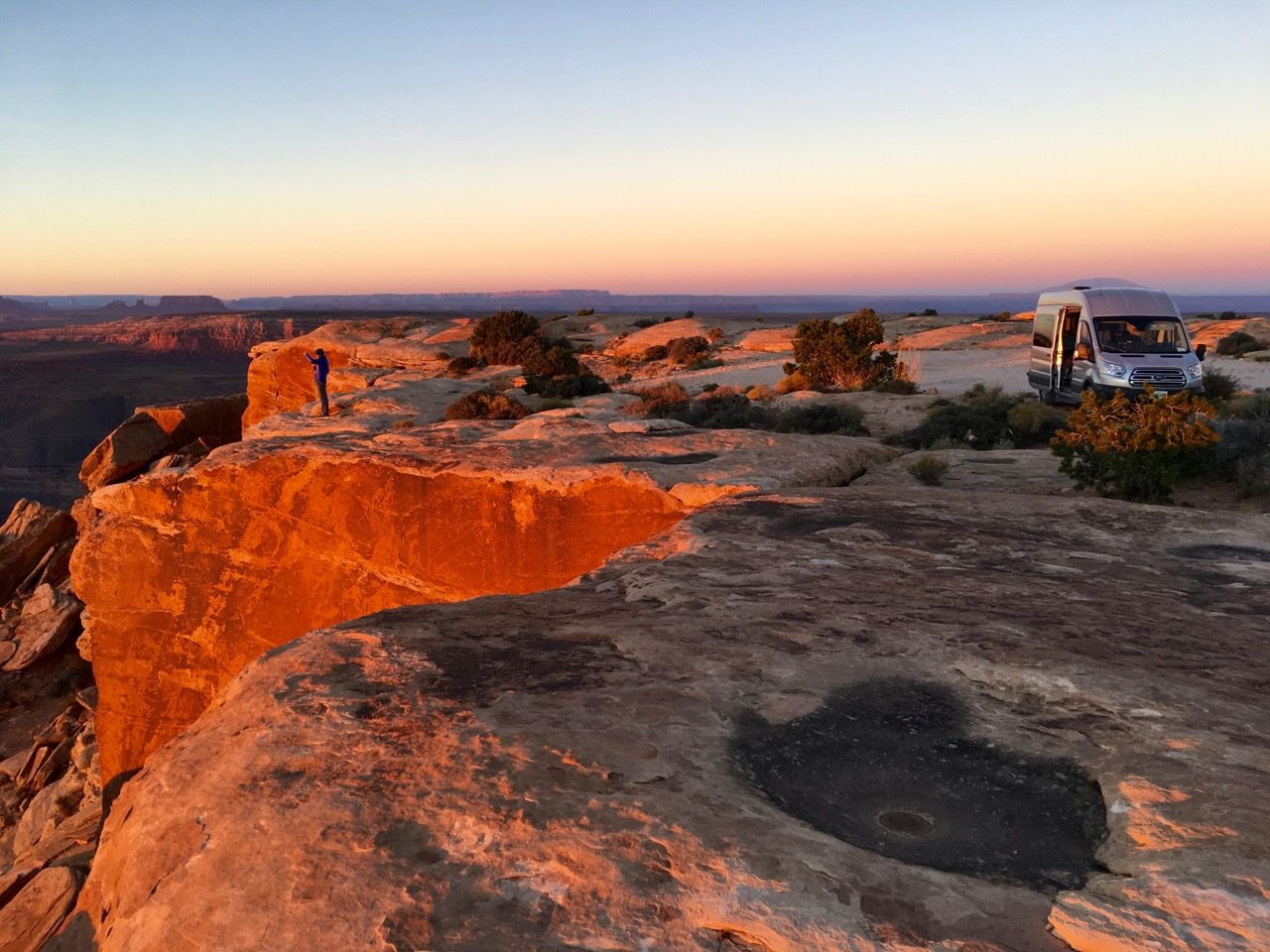 After departing the Needles District of Canyonlands National Park on Monday, October 17, we restocked and cleaned up in Blanding. The Edge of Cedars State Park Museum is located there, which has an extraordinary collection of ancestral puebloan pottery and artifacts as well as a restored mesa-top ruin with a kiva that’s accessible to visitors. From there, we camped a few miles north of town at the Devil’s Canyon Campground in the Manti-La Sal National Forest.

The next morning, we drove southeast to Cedar Mesa, a plateau in Utah’s southeastern most corner. We stopped by the Kane Gulch Ranger Station to fill our water jugs and find out about nearby hikes. The helpful volunteer ranger told us about all sorts of places to explore. First up in the afternoon was a quick three mile out-and-back hike into South Mule Canyon to see the House on Fire Ruin, just a few miles north of Hwy 261. Just down the road on the south side was Cave Canyon Ruins, a set of seven stone towers that line the spring-fed Lower Mule Canyon. We camped right by the trailhead that night and had the place to ourselves. 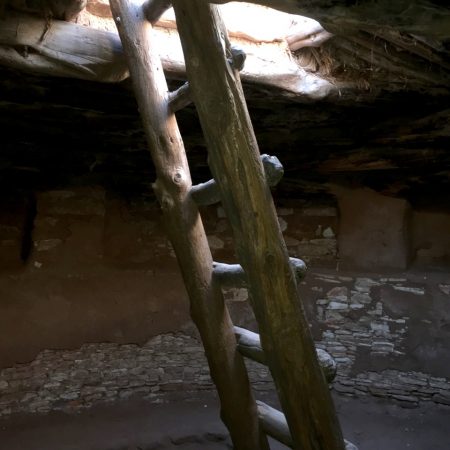 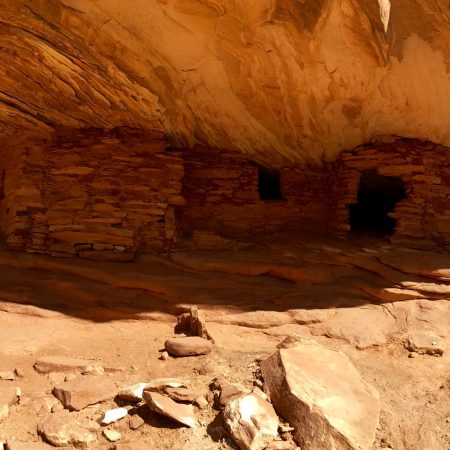 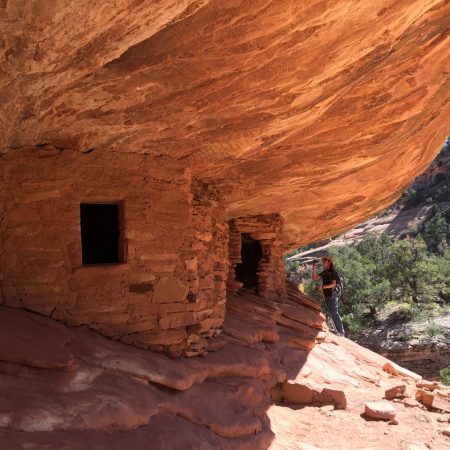 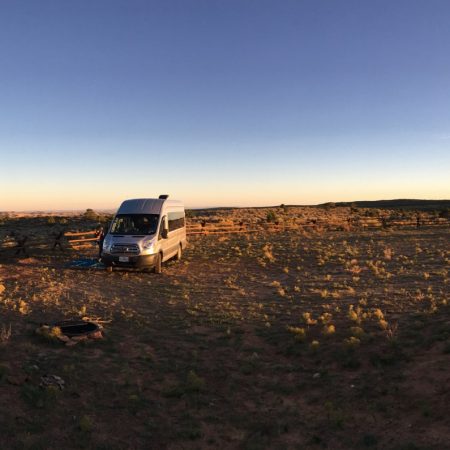 Wednesday, October 19, we tackled a longer hike from the trailhead back at the ranger station. To start, we walked four miles through Kane Gulch which was filled with aspen groves, ancient gnarled cottonwood trees, huge rock falls and steeply angled canyon walls. At the intersection of the Kane and Grand Gulch, a cliff dwelling called Junction Ruin is tucked in along a cliff-side ledge.

We continued for another mile to explore the Turkey Pen Ruin which featured an intact wooden enclosure and small rooms constructed from wattle and dab. When this ruin was first discovered in the early 1900s, archeologists excavated turkey poop that was seven feet deep at this site! At Edge of Cedars Museum and later at the Prehistoric Museum in Price, we admired warm capes and rugs made from twisted yucca fiber and turkey down crafted by these ancient cliff dwellers. 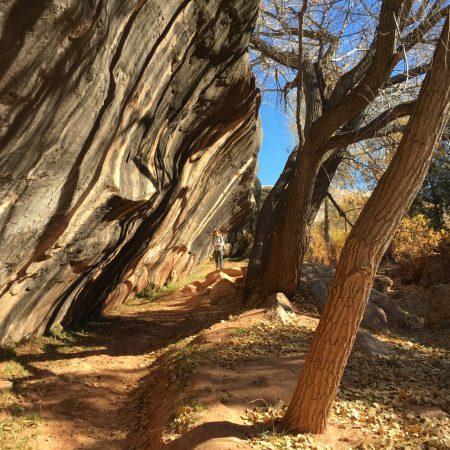 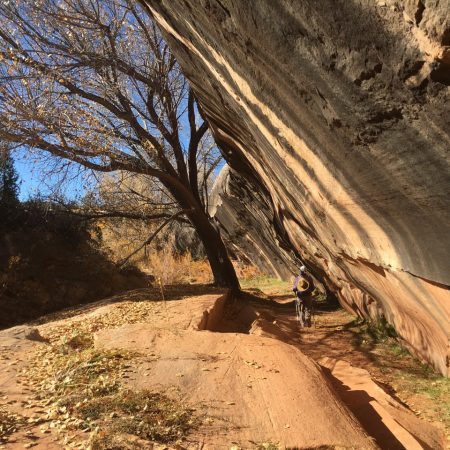 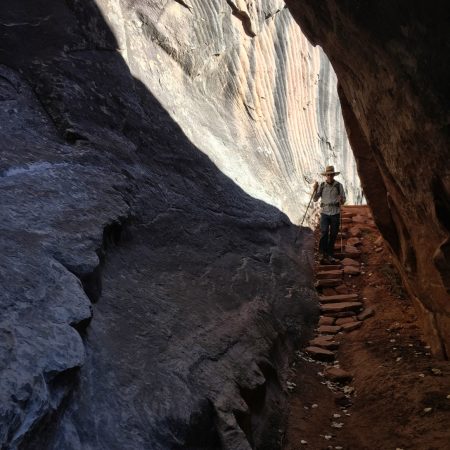 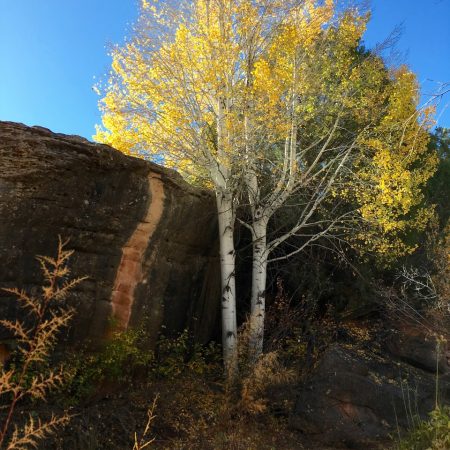 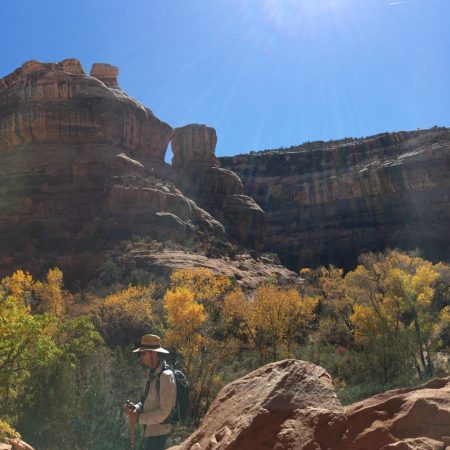 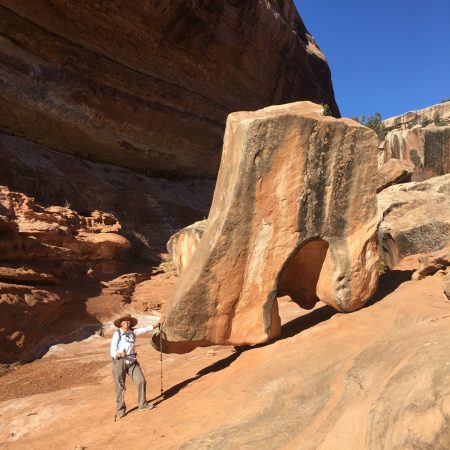 It was extraordinary to see ancient corn cobs still in situ under the cliffs along with midden mounds littered with pot sherds. An array of manos and metates seemed poised for the task of grinding the day’s corn in to meal. A series of skinny slots carved into a boulder were most likely used to straighten arrow shafts.

We learned from another couple backpacking the entire 36 mile Grand Gulch over several days that the ruins furthest into this remote canyon where even more spectacular and complex. Fortunately, there’s a strict no touching, moving or collecting of antiquities law in place now which appears to be helping to preserve what hasn’t already been looted.

A half mile further down the canyon revealed Stimper Arch high above on the opposite canyon wall. From there, we returned the way we came for a total of 10 miles and ascent of 1067 feet. 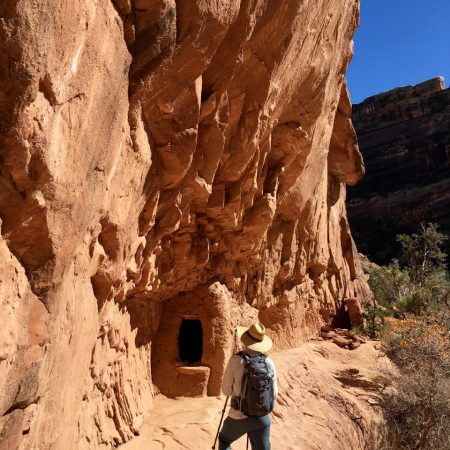 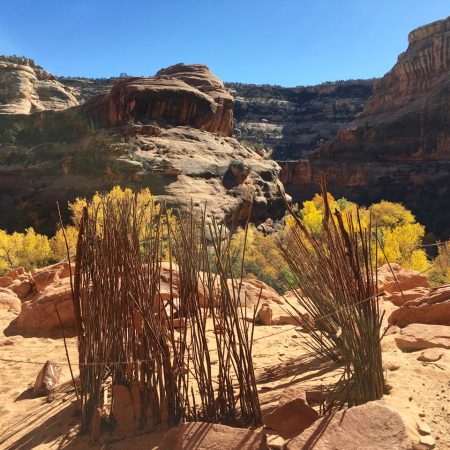 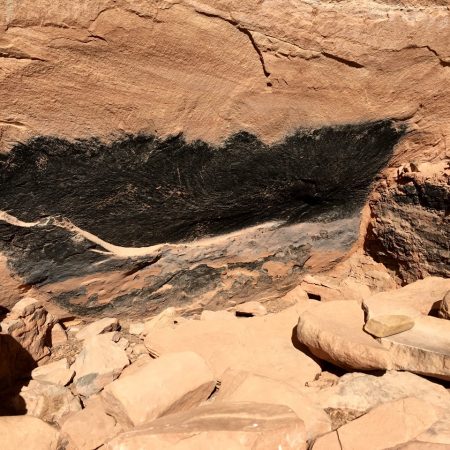 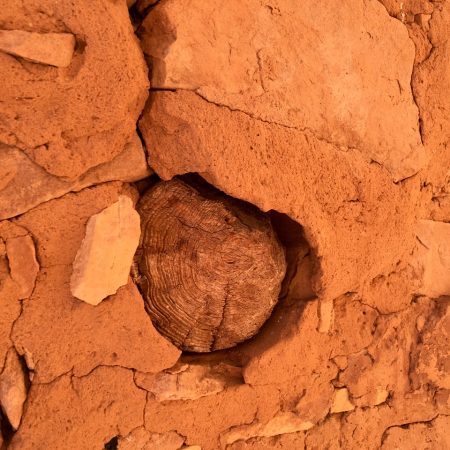 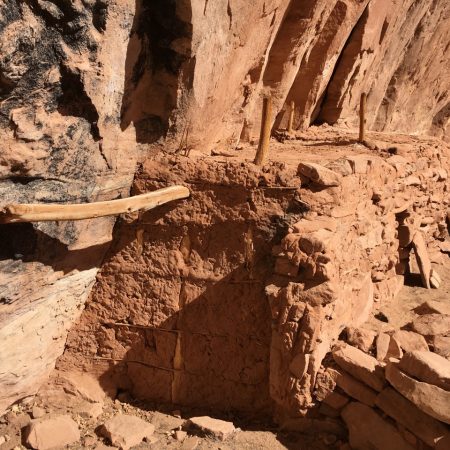 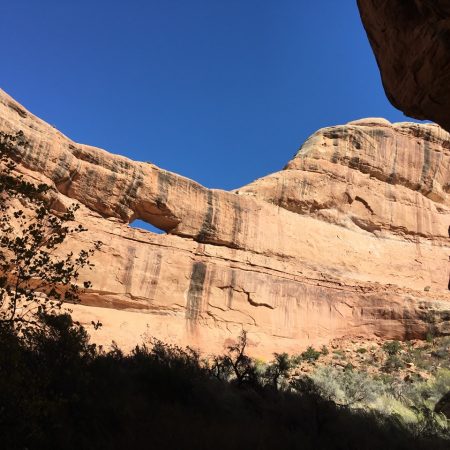 That night, upon the ranger’s recommendation, we drove 30 miles south to camp at Muley Point Overlook, which is at the end of a five mile long dirt road that departs to the west along the mesa edge just before the Moki Dugway. We were rewarded with solitude, a stunning sunset and astonishing views overlooking both Monument Valley and the Valley of the Gods. 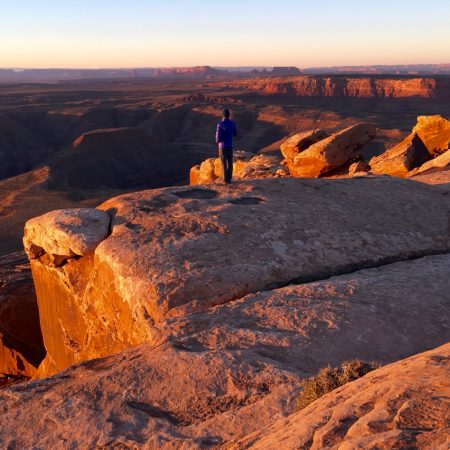 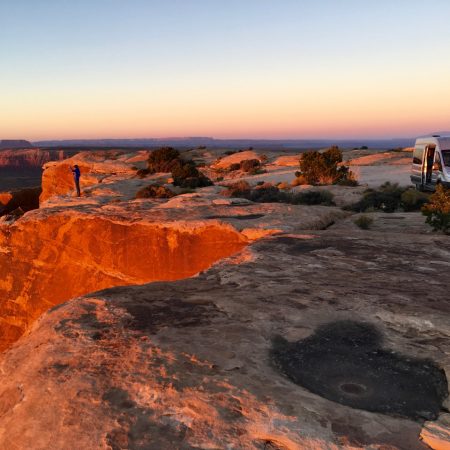 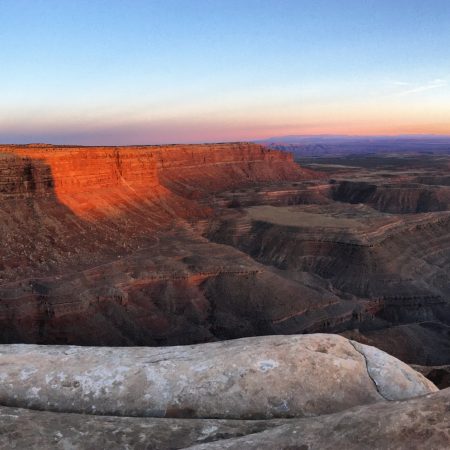 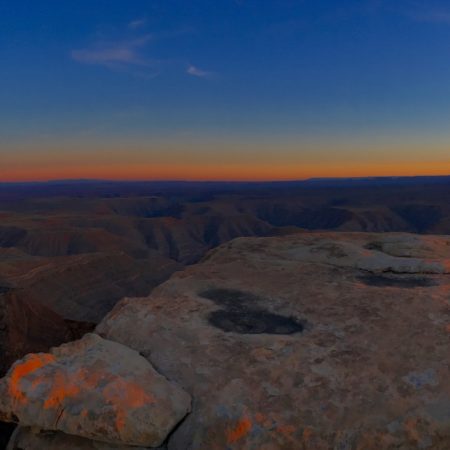 In fact, it was so beautiful here that we stayed a second night. We just moved the van about a hundred feet to the east for the second night. During the day, a dozen or so vehicles drove out to admire the views from the overlook. Because we were perched on solid rock and could never predict when the next visitor might arrive, we finally pulled out the Luggable Loo that we’d been hauling around for the past year. We’ll spare you details but we can report that it worked as promised.

On Friday the 21st, we drove the dramatic switchbacks of the Moki Dugway down into the Valley of the Gods, a 17 mile dirt road that mimics nearby Monument Valley. We made note of many great boondocking spots for a future trip. 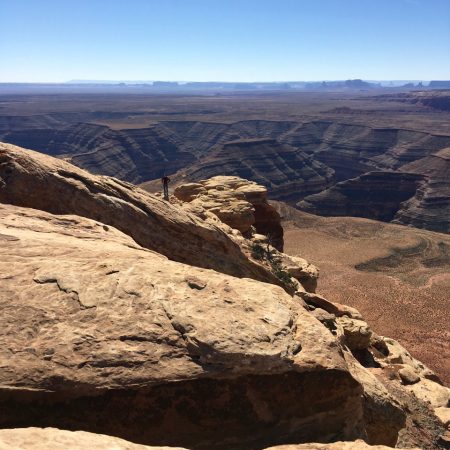 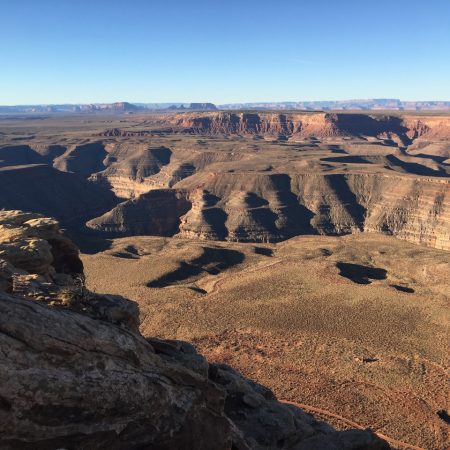 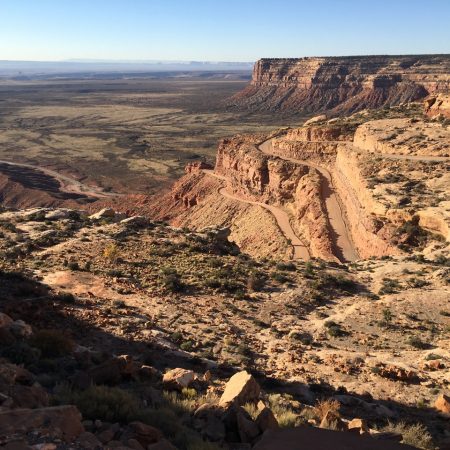 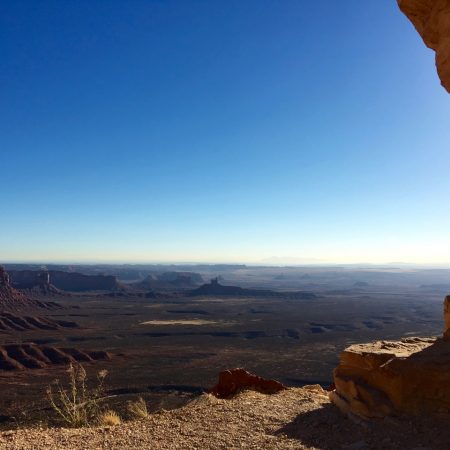 We returned up to the top of Cedar Mesa via Hwy 163 to locate the pictographs of the Wolfman Panel, less than a mile from the highway off of Lower Butler Wash Road on the east side of Comb Ridge. The graphic images are some of the most unique and other-wordly we’ve seen in our travels. Sadly, they’ve been damaged by bullets.

We gassed up again in Bluff, then drove out to Hovenweep National Monument to camp Friday night. We hiked the Ruin Loop in the morning, and then explored the Horseshoe and Hackberry Ruins. We also stopped at the Lowry Pueblo in the Canyons of the Ancients National Monument in Colorado, just over the border on the way to Mesa Verde National Park.

One thought on “Cedar Mesa”