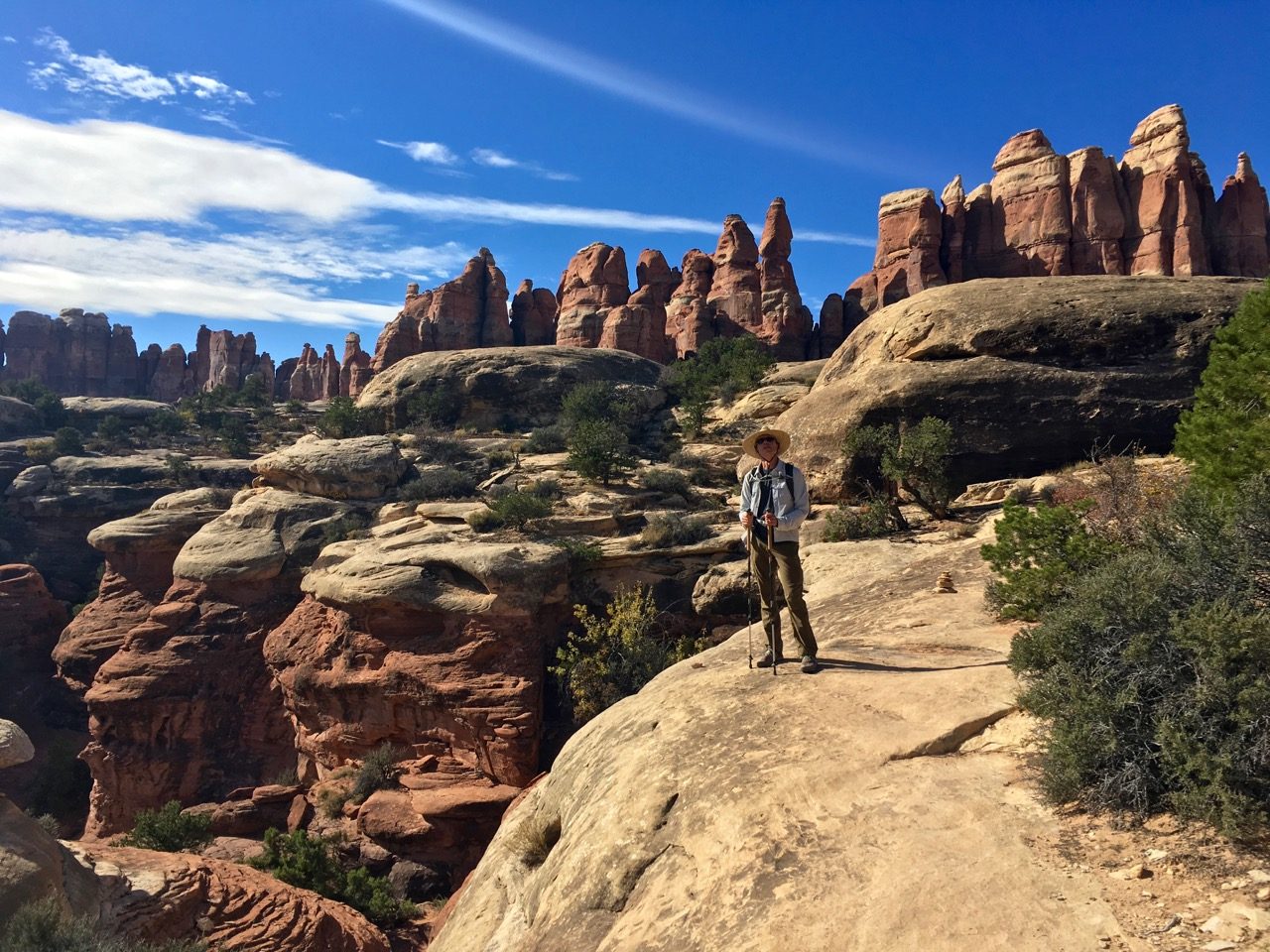 The next stop on our six week Fall escapade was the Needles District, one of four distinct areas within the Canyonlands National Park, in Utah’s southeast corner and the furthest from Moab. It’s known by its iconic, white-topped red spires of Cedar Mesa Sandstone.

When we visited Needles a year ago, we hiked all of the shorter options in the park on our very cold, overnight visit. (Pothole Point, Cave Spring, Roadside Ruin). Needles hikes tend to be either very short, or very long. This time, we wanted to focus on longer hikes which meant starting shortly after sunrise to take advantage of the cooler mornings.

Unlike the Island in the Sky District which is just thirty minutes northwest of Moab, there’s no cell phone reception in this remote area. In Needles, you’re essentially traveling through the middle layers of the rock formations (Triassic and Permian layers) so it’s hotter and windier. In contrast, visitors to the Island District hike, camp and drive on top of the mesa (Jurassic layers).

During each of the four days we spent in Needles, the weather was 80 degrees, breezy, with wispy clouds at sunset, starry nights, and a full moon. We camped three nights at Hamburger Rock, a BLM campground on Lockhart Basin Road, three miles southeast of the NP entrance. The ten sites surround a series of squat hamburger-shaped red rocks. Our site was on the west side so we enjoyed the sunset displays each night. 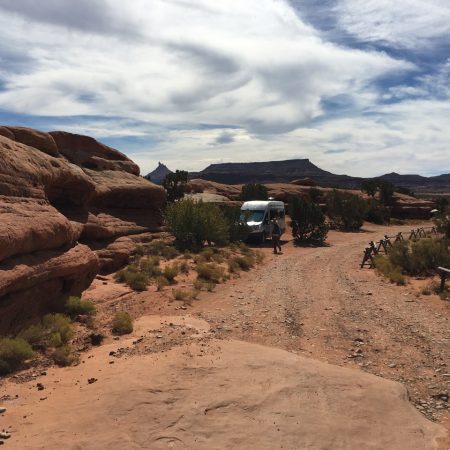 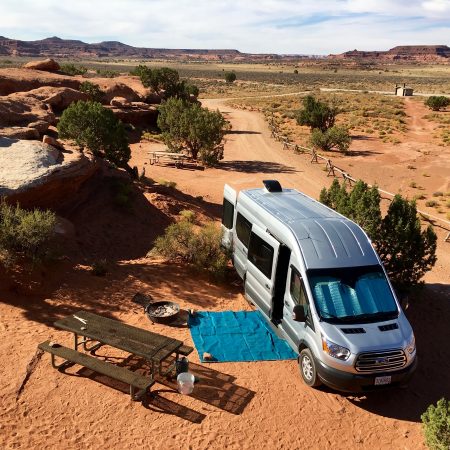 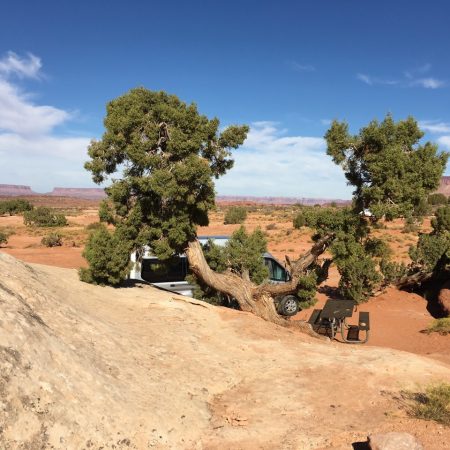 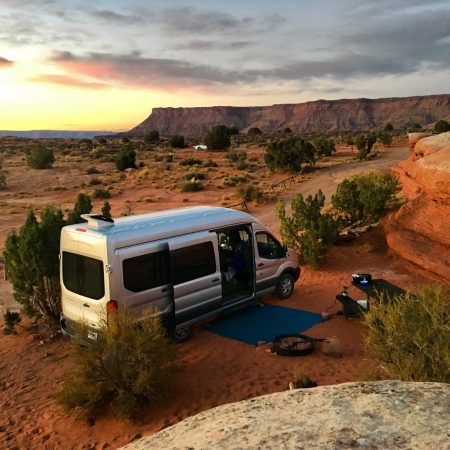 Friday, October 14. We left Ken’s Lake bright and early Friday morning, knowing that the weekend is the busiest around any national park. Unfortunately, we lost an hour by taking a premature turn into the northern-most section of the Needles. We only realized this when we ran out of road at the Needles Overlook. After backtracking 20 miles to the main road, we continued south to Hwy 211 which would take us to the Visitors Center and Squaw Flats campground. Sadly, all the spots were taken by 10 am.

We turned around and drove 15 minutes outside the park to a small BLM campground a mile from the main road and by 10:30 a.m., we secured one of three remaining sites. In need of some exercise, we set off an hour later for Indian Creek which we could see in the distance. We followed a sandy road that departed from the northeast corner of the Hamburger Rock formation. After a mile and half in the too-strong mid-day sun, we found the featureless dry creek bed and returned to camp for a shower.

Saturday, October 15  After a quick stop at the Visitor’s Center to check email, we arrived at the Squaw Flats Trailhead to hike the 7.5 mile Squaw Canyon to Big Springs Loop. At the trail’s beginning, a long section meanders through meadows and washes filled with cottonwood trees before climbing around, through and over solid swirly shapes of Cedar Mesa Sandstone. We traveled over broad sweeping shoulders of slickrock and some sections that required a steep scramble to the top.
8:30 a.m. to 1 p.m., 70 degrees, 876 feet elevation gain, highest altitude 5492 feet. 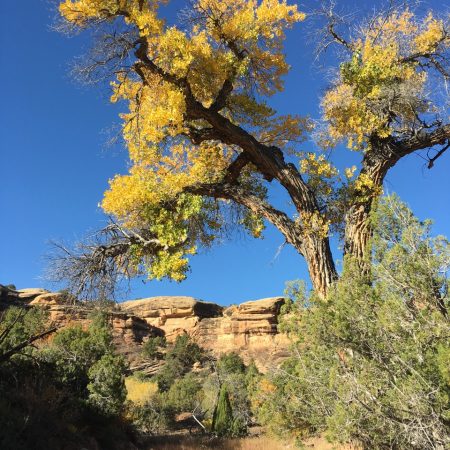 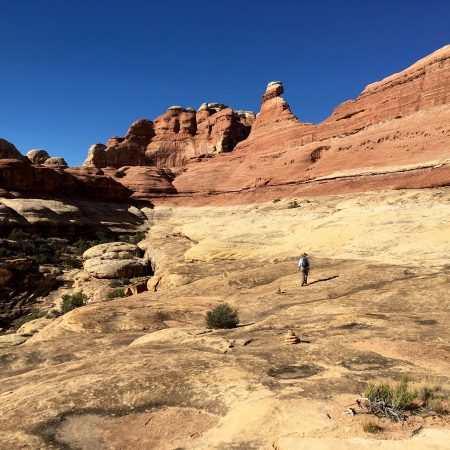 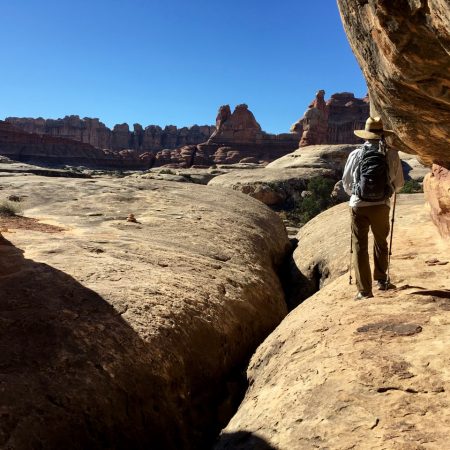 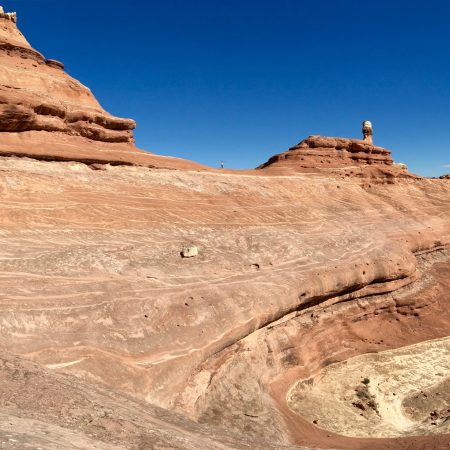 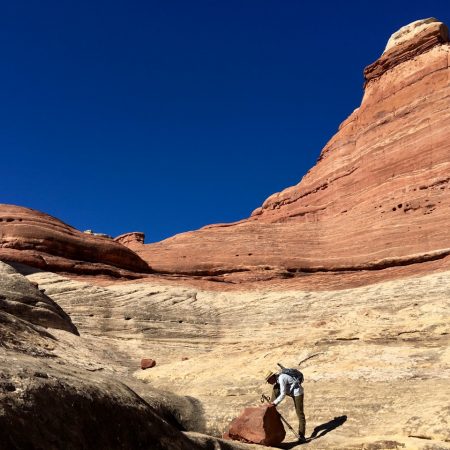 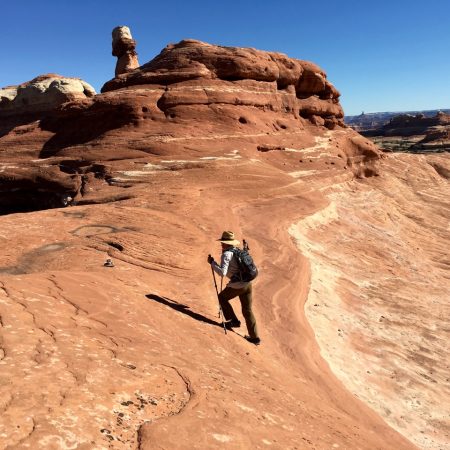 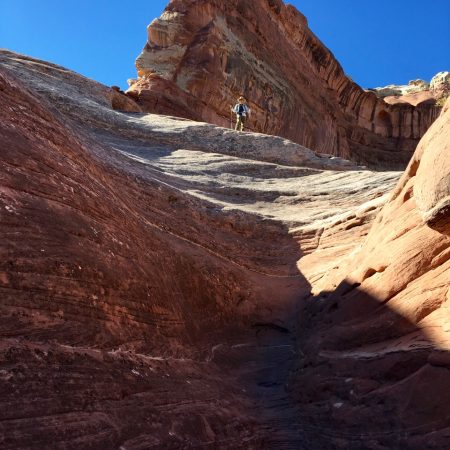 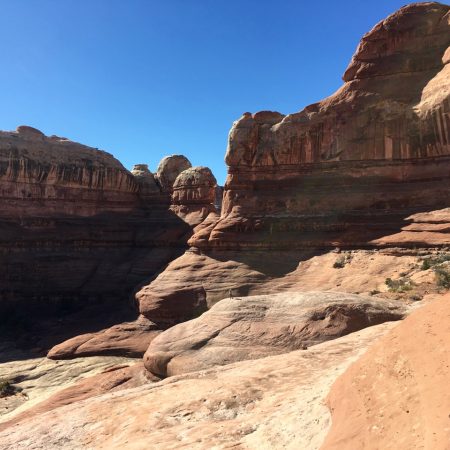 Sunday October 16 We hiked the Chesler Park Trail, a 6 mile out-and-back departing from the Elephant Hill Trailhead which is down a winding rock and gravel road that cuts through layers of sandstone, shale and limestone. It’s a trail with lots of ups and downs, a varied landscape, cool slot canyon, and delightful morning shade. The wind gusts were so powerful in the saddles that we had to tie our hats to our day pack straps so they wouldn’t fly off!
8:30 a.m. to noon, 1142 feet ascent, 5644 feet highest altitude. 80 degrees. 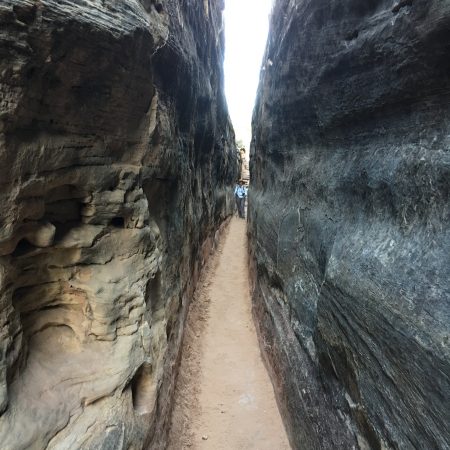 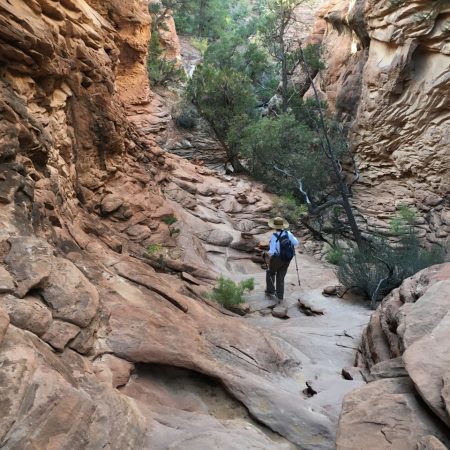 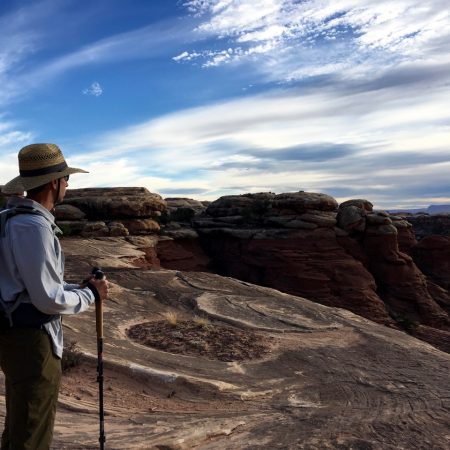 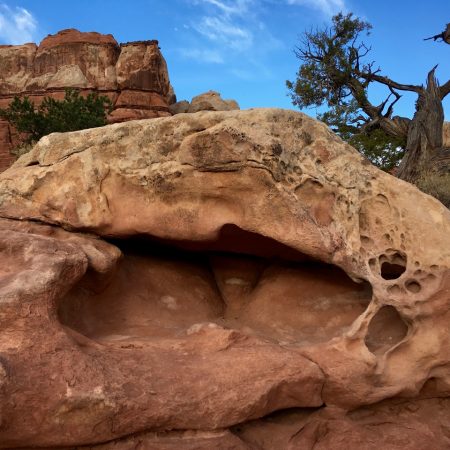 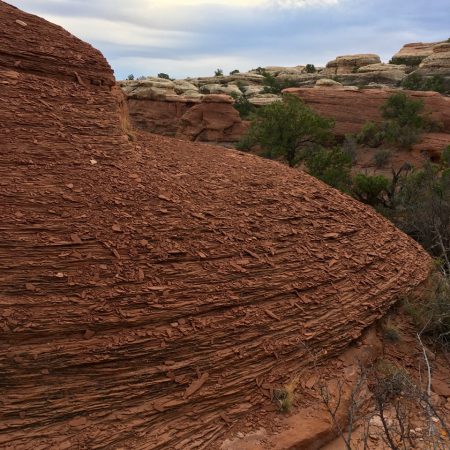 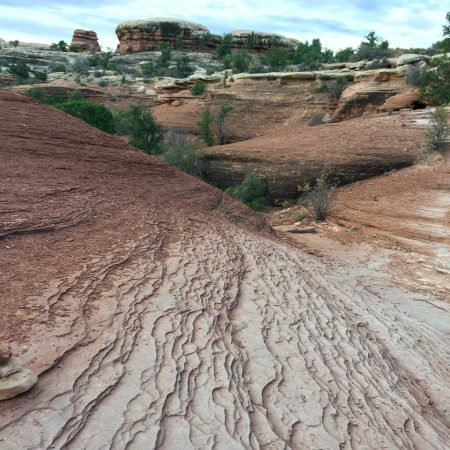 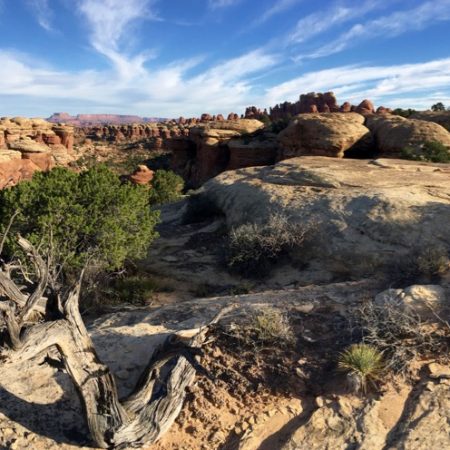 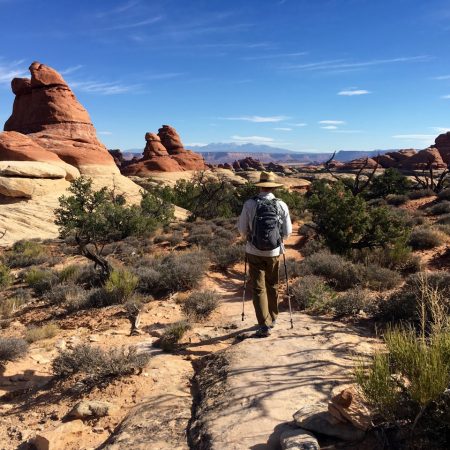 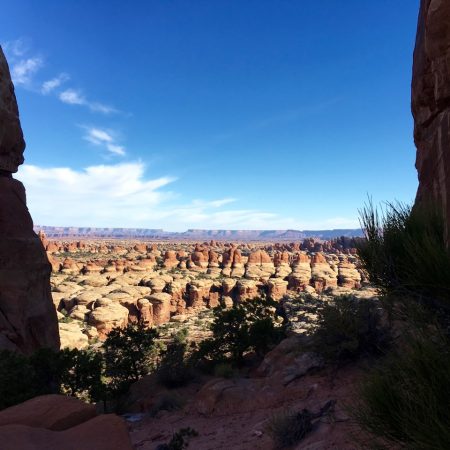 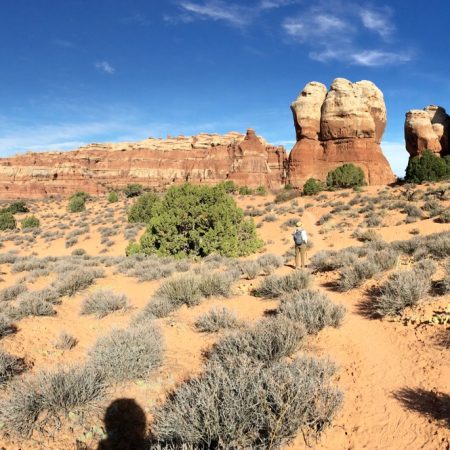 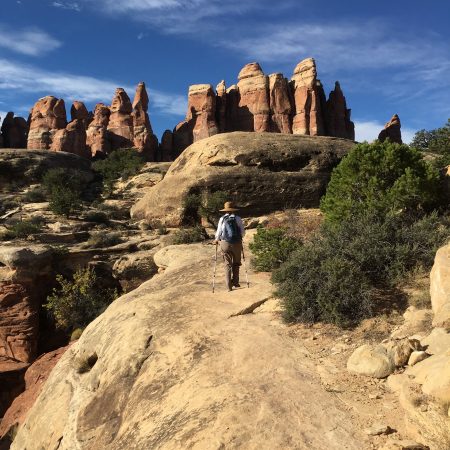 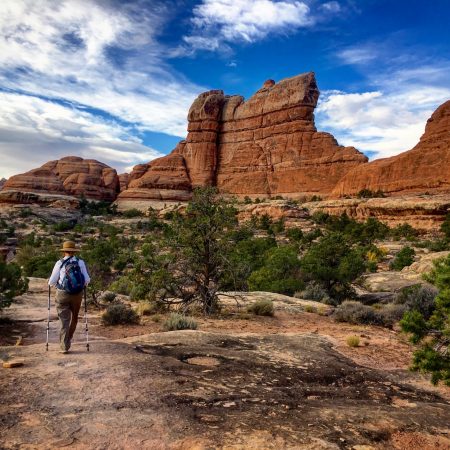 Monday October 17 Time to saddle up, get to town to do laundry and re-provision! We drove to Blanding, a little ways south of Needles where we also stopped at the surprisingly excellent Edge of the Cedars Museum.

One thought on “Canyonlands: Needles District”