Canyonlands: Island in the Sky 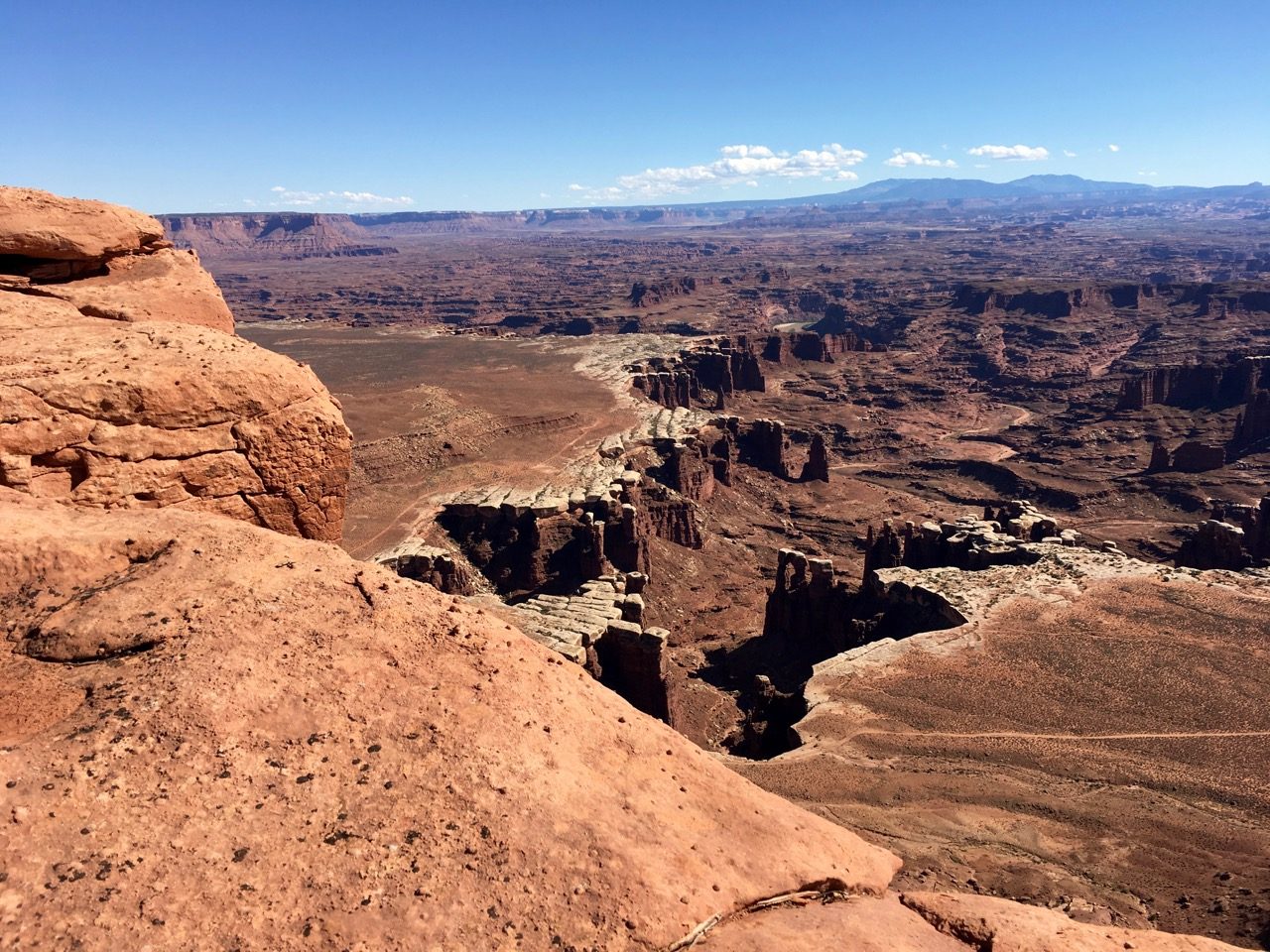 It took us three long days to drive from Glacier National Park just shy of the Canadian border in Montana, to southeastern Utah. We spent a night along the west side of Flathead Lake south of  Kalispell, then just outside Missoula, and finally in Idaho Falls before the final push to our favorite Utah headquarters, Moab.

First on our list of adventures was to explore the Island in the Sky District of Canyonlands National Park. It’s only a short thirty minute drive from Moab.

In Canyonlands, every road, parking pad and camping spot had been newly paved or resurfaced to celebrate the National Park Service’s highly promoted centennial this year. We spent five days camping in and hiking from the national park’s only campground, the tiny 12 site Willow Flat Campground. Each site had a covered picnic area that provided a great place to string the hammock, too. We felt very fortunate to get a spot, bright and early on a Wednesday morning before the other sharks started to circle. The location was ideal and only a short walk to one of the more stunning overlooks, Green River Overlook. Each night, we watched dozens of guys lugging giant cameras and long tripods arrived just before sunset to photograph the evening’s show. Returning from the overlook the first night, we encountered the largest buck we’ve ever seen, sporting a broad 10 point rack, right along the road side. Five nights later, we each spooked him at different times when we went out to use the facilities in the middle of the night. He was standing in a narrow spot between a truck and a tree when I surprised him at 5 a.m. and his antlers left a scratch on the truck’s black paint.

Twice we saw the tiniest desert fox cruising around our campsite at dusk. Hardly bigger than a small house cat, his black tipped tail was as long as his body. After seeing a little too much wildlife in Glacier National Park the previous week, we were thrilled to spot this elusive little critter. 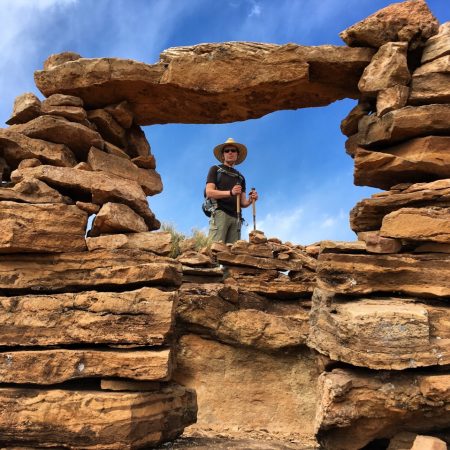 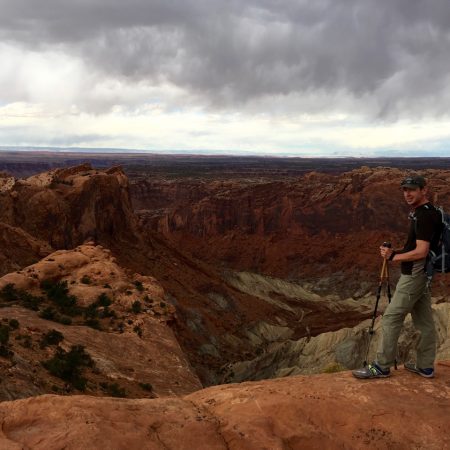 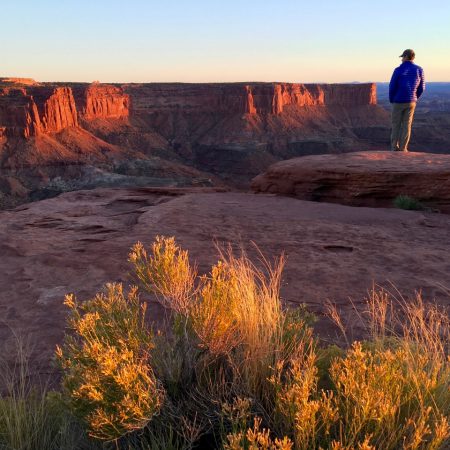 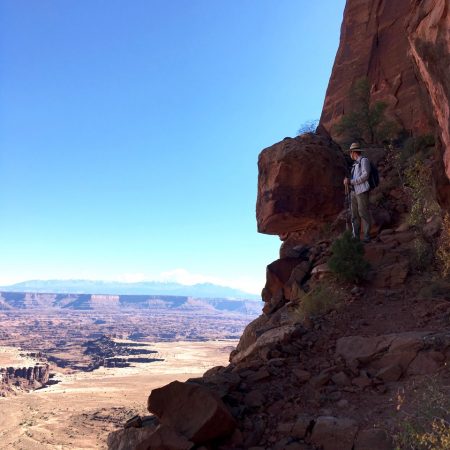 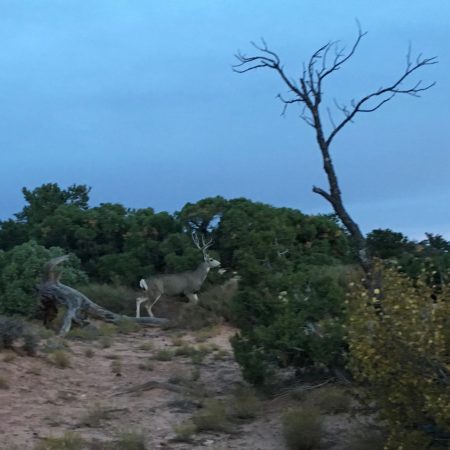 October 5 The Island in the Sky District of Canyonlands sits at over 6000 feet elevation, high above the surrounding dramatic landscapes on the top of the mesa. We spent our first afternoon getting acclimated to the sun and the elevation with three short hikes: a two mile to Aztec Butte which featured a small Anasazi granary, a one mile stretch of the legs up to the top of Whale Rock and a two mile walk out to the Upheaval Dome Overlook.

October 6 We chose the challenging Gooseberry hike which starts very abruptly over the edge of the mesa and descends straight down narrow, loose rock switchbacks. We managed almost 1000 feet of descent in one mile, (about 2/3 of the way down) before giving ourselves permission to regain the mesa top.

October 7 The Park Ranger recommended the top portion of the Lathrop Trail, which we agreed was our favorite hike, too. It starts in two mile long high-grass meadow then winds through white swirls of sandstone. We went a little further and dropped over the mesa edge following a long series of gradual switchbacks along the canyon wall.11 a.m. – 3 p.m., 4 hours, 6 miles, 760 feet elevation gain. 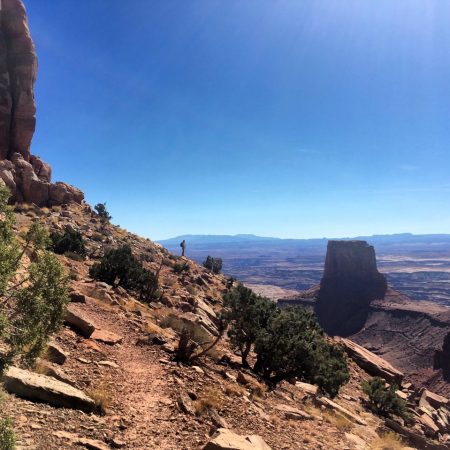 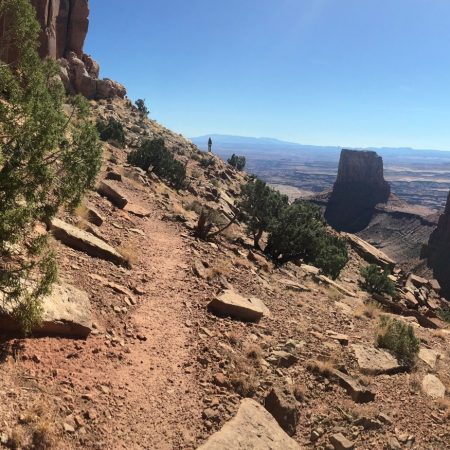 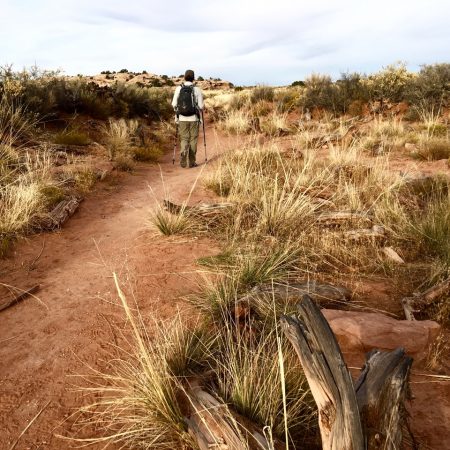 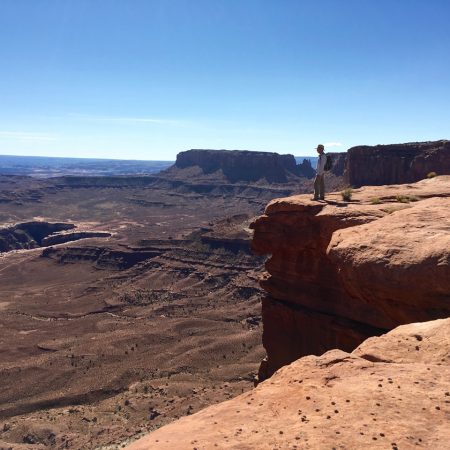 October 8 We did two shorter hikes: to Grandview Overlook (two miles) then one from the Murphy Point Overlook (three miles) later in the afternoon.

October 9 We left early in the morning to secure a spot at our next location, Ken’s Lake, a BLM campground ten minutes south of Moab.