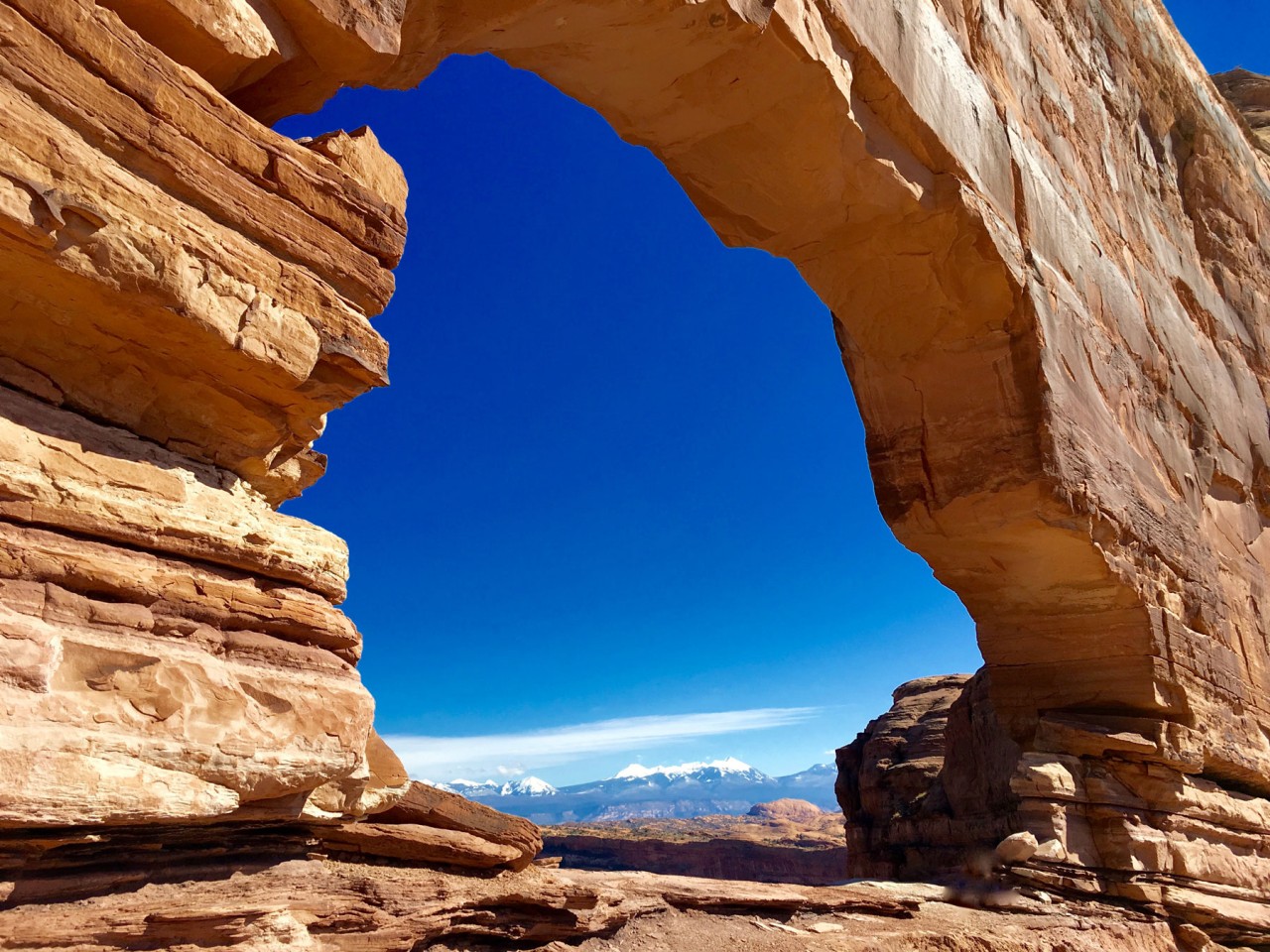 We spent a second night at Granstaff Campground, only three miles from Moab along Utah 128. In the morning we were delayed a bit while we watched fellow campers take off, fly around, and land their powered parachutes from the parking lot a few hundred feet away. They swirled and curled high above the Colorado River and disappeared into the nearby Negro Bill Canyon that we’d hiked just the day before. The two pilots were airborne for almost an hour, taking advantage of the updrafts and thermals that were generated in the morning sun.

The sun hadn’t yet reached our bend in the river so it was a chilly 50 degrees when we left for today’s hiking destination at the Culvert Canyon trailhead. This trail is also known as Dragonfly Canyon which is about 10 miles west of Moab. It’s along Potash Road (Hwy 279) which follows the winding Colorado River towards the solar evaporating potash ponds. Way up high and two miles away out of sight is our destination— Jeep Arch. It’s also called Gold Bar Arch. 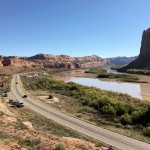 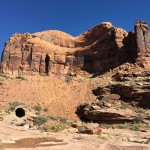 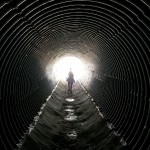 We passed a mile’s worth of vans pulled over along the road side where dozens of people practiced their rock climbing skills. Further on, the trail head is off a small parking lot with a culvert that runs under the train tracks. We walked through the culvert and immediately started climbing across a wide apron of stepped rock layers for over an hour, passing Dragonfly Canyon on the way.

This area is also a prime spot for Bighorn Sheep lambing and signs posted along the way asked dog owners to keep their pets leashed and under control. True to form, not a single dog owner (and there were many) complied. 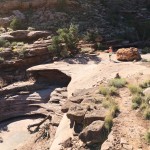 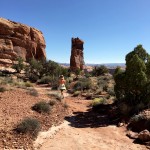 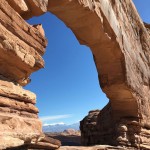 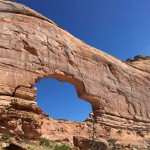 At about the halfway mark, the trail divided and we chose the right hand loop. We scrambled up a series of adrenaline-inducing ledges, relieved that we wouldn’t have to go down the same way on the return trip. Finally, the majestic Jeep Arch rose into sky as we rounded a curve in the cliff wall. From some angles, you can see the Jeep shape silhouetted in the arch. The low roar of distant ORVs could be heard on the surrounding mesas and every once in a while we spotted the flash of metal in the distance.

We walked up through the broad arch and on the other side  we got a big bonus — the sight of the snow-capped Manti-La Sal mountain range in the distance, showcased through the window-like opening. In 1776, Spanish explorer and missionary Silvestre Valez de Escalante saw the mountains and called them the Sierra La Sal, or “Salt Mountains” because he deemed it so unlikely that they could be covered with snow so late in the summer.  These mountains had been hidden under thick cloud cover until today. There are over twenty peaks in the range, the highest of which is over 12,700 feet.

On the down side, a group of other hikers lounged about in the middle of the arch opening noisily chatting up a group of girls. (they’ve now been conveniently Photoshopped out of the pictures). 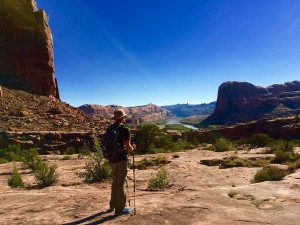 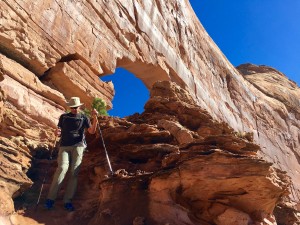 Much to Chris’s chagrin, the return segment of the arch loop had just as many sweaty-palm inducing descents over the slickrock sandy ledges as the trip approaching the arch.

Upon returning to the van, we discovered that we’d forgotten to raise the roof vent before leaving. Inside temperature was a toasty 115 degrees. Lesson learned! 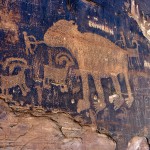 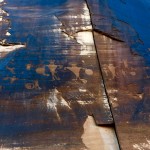 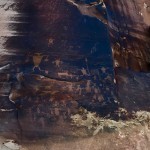 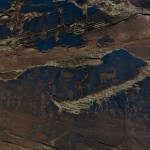 Before heading back to town for some gelato, a hot shower and a stop at the official Utah Liquor store to buy some proper beer, we stopped at the sign for “Indian Writing” which was only a few miles from the trail head and pulled over to admire the numerous petroglyphs that decorated the bronze colored cliff walls along this section of the Lower Colorado River. Bears and sheep and hunters— oh my!