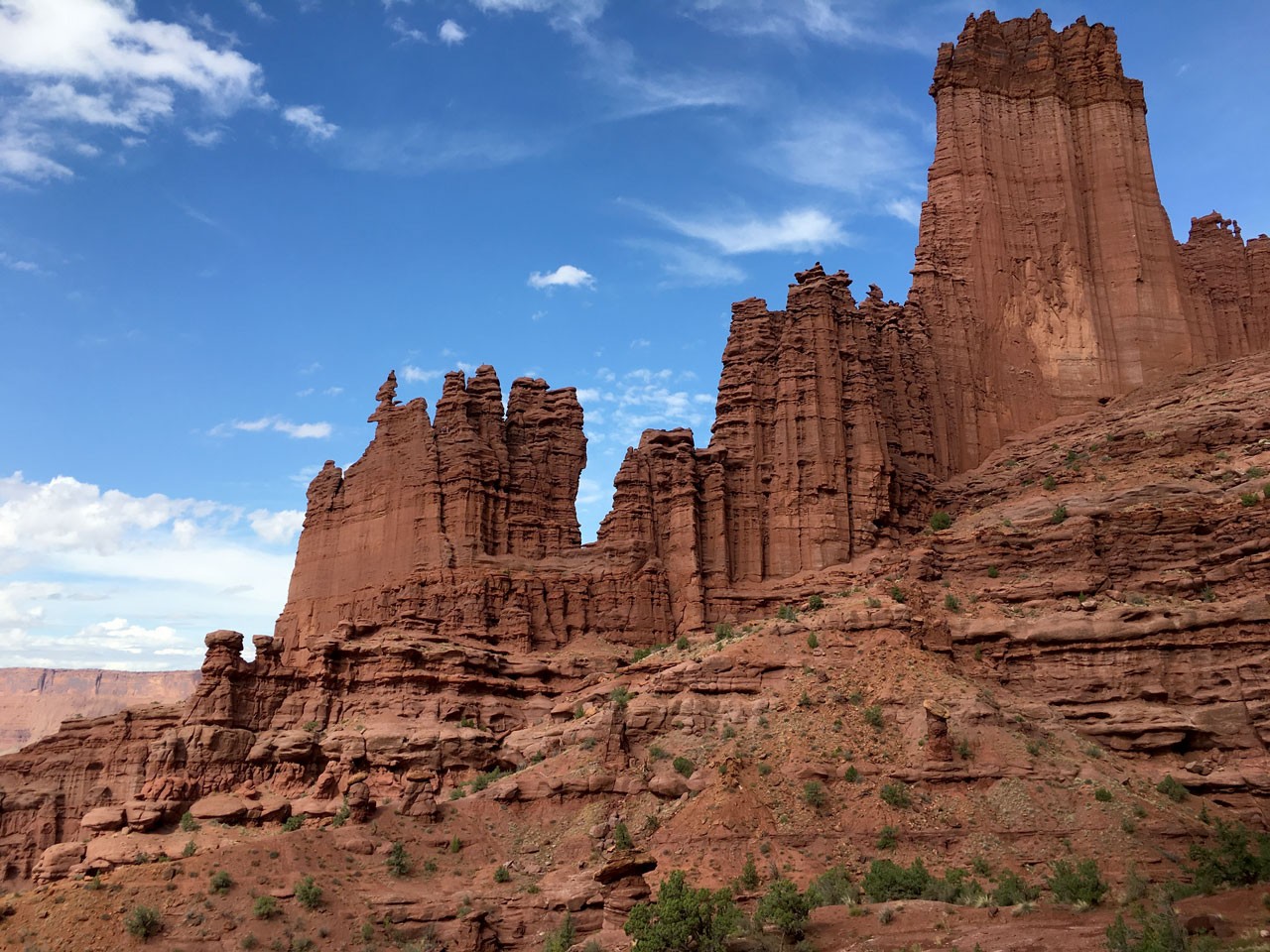 Monday was spent as a “going to town day”. We took $4 showers at the beautiful new Moab Aquatic & Recreation Center, then spent a few hours at one of the nicest libraries we’ve ever been in. It was also new and very much set up for out of town visitors who may be in need of a little free WiFi, comfortable chairs,  and charging stations. By the time we looked up it was already past 2 pm.

We figured it was time find some accommodations for the night so we drove just north and east of town on Utah 128 where there were a dozen or so BLM campgrounds along the Colorado River. We snagged a nice little spot in tiny Oak Grove Campground, where the muddy Colorado River flowed swiftly by just a few yards beyond the back door of the van. 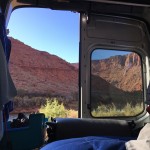 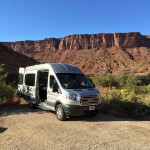 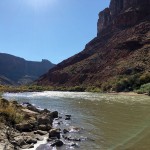 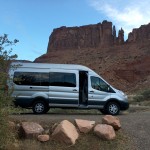 After paying the $15 fee, setting out a water jug and a few camp chairs to mark our site, we drove back to town to try out Moab Brewing, our first dinner out since we left Oregon two weeks ago. Delicious. Before driving the ten miles back to the campground, we stopped into the Village Market which was a lot like Trader Joes. Yay! Between the Brewery, the library, hot showers and a decent grocery store, we found a whole lot to like about Moab.

Monday night it rained and blew really hard for a couple hours. Once again, we were very happy to be inside our weather-tight vessel. The tent campers on either side of us already looked soaked from the stormy weather the previous night. 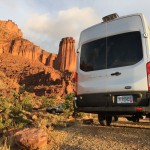 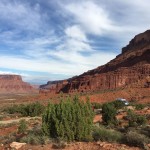 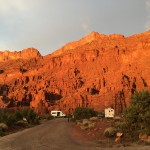 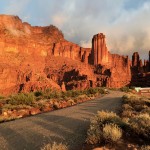 In the morning, we continued east about 16 more miles on 128 to Fisher Towers, one of the most iconic red sandstone features in Utah, fully expecting the five campsites there to be occupied. As luck had it (and it was only 9:30 am) we were able to snag the only, and best remaining spot just as the occupants departed. The camping Gods were looking out for us again! 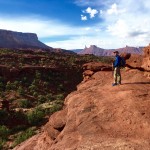 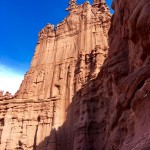 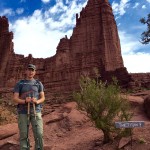 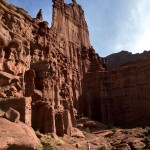 With another thunderstorm scheduled to blow in by mid-afternoon, we grabbed the trekking poles, some water and Clif bars and set out for the 2.5 mile climb to Titan Tower and further on, Fisher Towers. These red sandstone towers rise in the Castle Valley in a kind of amphitheater formation known as the Richardson Amphitheater. You might recognize them if you’re a western film buff as they are featured prominently in Geronimo, Wagon Master and The Comancheros movies.

The trail winds along the base of the towers and climbs steadily along steep ridges, between boulders and through washes. One section even has a stainless steel ladder solidly cemented into the red sandstone ledge. It’s marked with rock cairns, the occasional carved wooden sign, and is lovingly-maintained by the BLM. 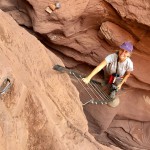 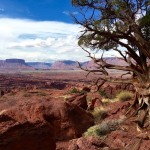 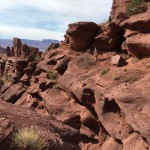 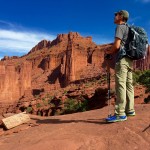 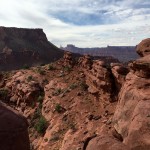 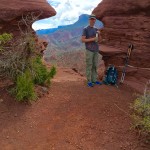 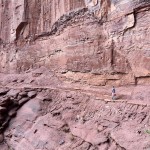 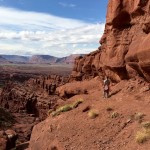 As we hiked, we used the binoculars to watch the progress of five rock climbers negotiate the peak of a particularly gnarly spire. We were thankful that neither of us had even the slightest desire to give climbing a try. On the return trip, we started to notice that the constant red from the sandstone formations affected our color vision. David commented that my blonde hair now looked green, and the two couples we passed both had skin tones of a very sickly shade of puce.

The van was now in full sun when we returned at 2 pm. We just opened the doors and it instantly converted into a shady cabana. Then the wind picked up, clouds gathered and thunder growled all around us. It poured for a few hours, drying up just in time to cook dinner outside before the sun set. 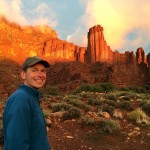 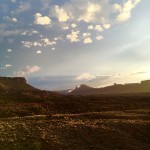 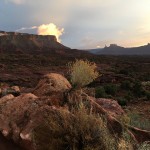 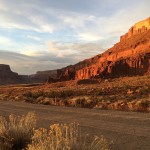 We enjoyed the “in living color movie” unfolding before us as the colors shifted and clouds wound through the red spires in the valley.

We’ve decided to spend another night at Fisher Towers, as it’s hard to imagine a more magnificent location! But first, we’re outta ice and another hot shower beckons. There’s a few more hikes nearby that we’ll try in the afternoon after the rain showers abate.