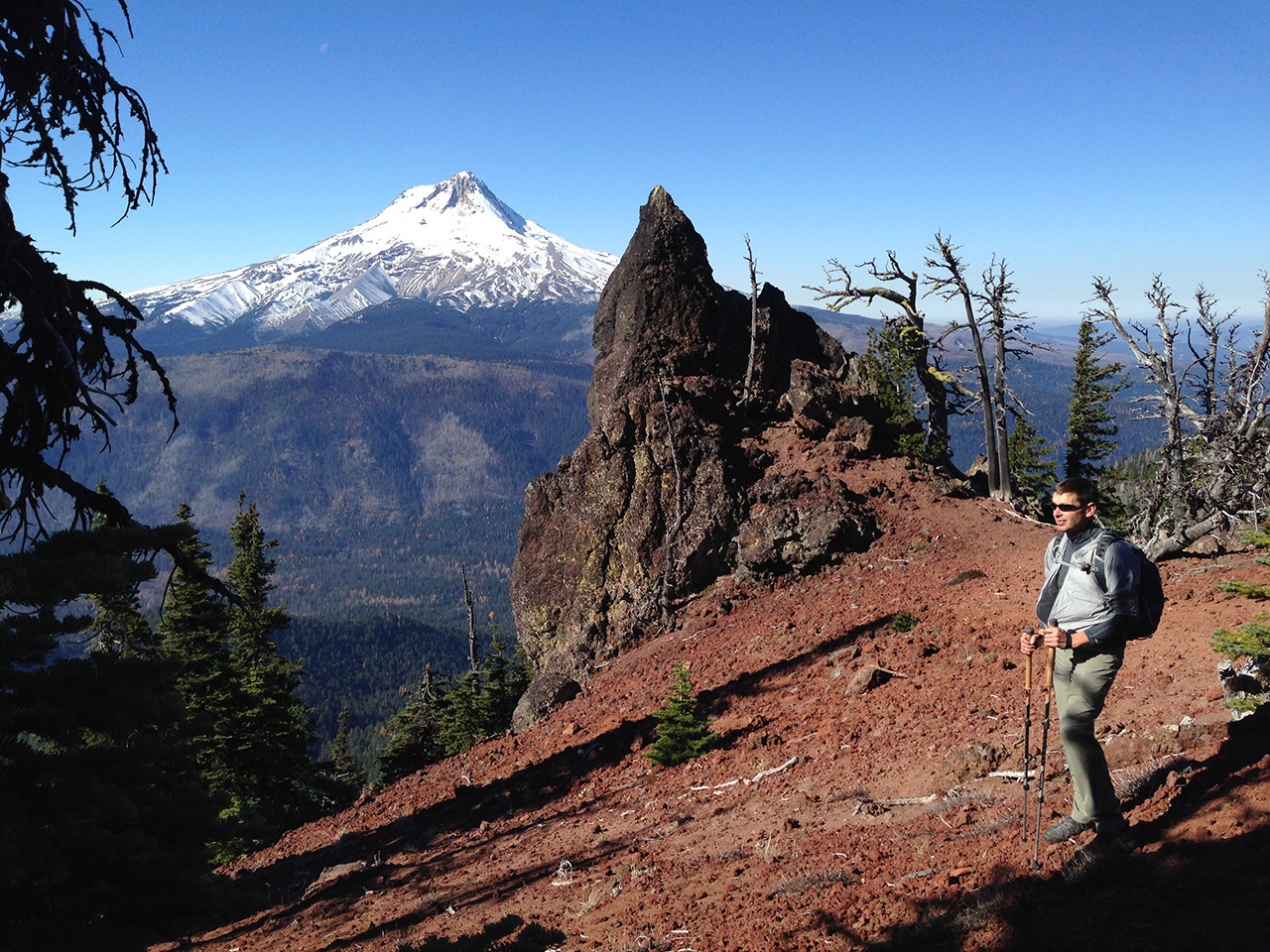 Wow! This first part of our hike, Lookout Mountain Loop is a keeper, featuring the most dramatic views in the shortest distance for the least effort.

True to form, our arrival at the High Prairie trailhead was straight up noon. On the dot. That left less than six hours to get back to the car before the sun set on this clear fall day. We brought maps and plans to get as far as the Flag Point Lookout if we wanted to. Only two other cars in the parking lot when we arrived. It took us a while to go the short 1.5 miles to Lookout Mountain (6525 feet elevation) mainly because we kept stopping to admire the fabulous views of east side of Mount Hood as well as Mt. Washington, Three Sisters and Mt. Jefferson to the south, plus Mt. St. Helens, Mt. Adams and Mt. Ranier to the North. 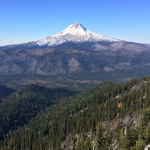 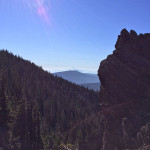 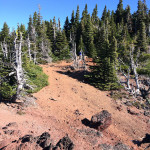 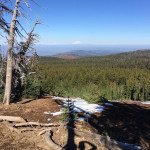 The tamarack trees were bright yellow, probably just days before dropping their foliage. We’ve never noticed them before, perhaps because we usually stay on the west side of Mount Hood. Here on the east side, their dramatic color punctuates all the green this time of year. They’ll soon be completely bare, and are one of the few deciduous conifers to loose their needles in winter.

We seriously considered camping out under the stars, tent-less, after our dreamy tent camping experience last weekend at Gray Butte. There were dozens of potential private, tent-pitching sites along the way. In retrospect, we’re glad we didn’t because we woke up to a stormy wet dawn, happy to be in snug in our house in Sandy.

At regular intervals along the way, sharp rock spires lined the cliff edge to the south, creating lots of photo ops. 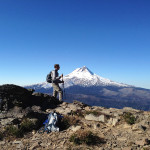 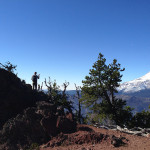 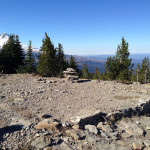 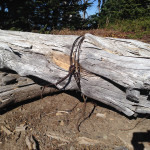 We met another group of colorfully clad hikers having lunch at the top of Lookout Mountain. These seasoned hikers recommended that we go as far as Palisades Point, a cluster of exotic rocky spines a few miles away. It occurred to us later that their fluorescent orange caps  and bright shirts were a smart move because it’s the middle of hunting season.

Along the way, we passed another small group of hikers as we dropped down the steep, rocky trail which followed the shady, north side of the Palisades. Another short climb and we arrived at Palisades Point, stopping for a snack and a bit of rock scrambling to take in the stunning views. 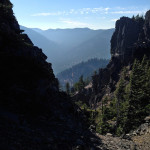 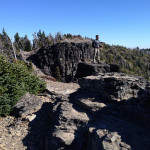 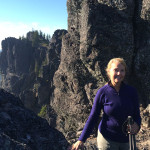 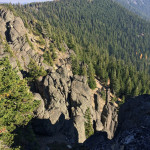 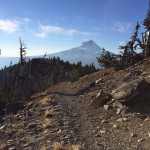 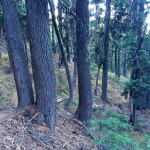 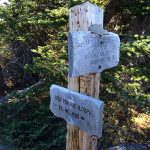 The trail back up to Lookout Mountain felt longer and steeper on the way back (uphill always seems to be that way). The alternate route we took back to the car was the old lookout supply road, a pleasant stroll through the forest and over some icy snow patches. We saw a much larger number of timber tigers than usual, probably the result of last minute attempts at stashing food before winter. Pine cone husks were scattered everywhere across the snow, leaving evidence of their diligent efforts.

We passed one couple heading up to Lookout to camp and a group of  mountain bikers at the trailhead as we packed up and headed for home. A puzzling sight along Hwy 44 (Dufur Mill Road) was this grouse wing collection barrel, courtesy of our friends at ODFW. The sign attached to this 55 gallon barrel of death reads “Please place one wing and the tail from each bird harvested in the paper bag provided. One bag for each bird. Write the date and general location of harvest on the bag. Thank you.” I peaked inside and saw only one messy ziplock baggy. No paper bags at all.

Other than this perplexing aside, we had a spectacular outing, and look forward to bringing out-of-town friends and family, at least as far as Lookout Mountain. We’ll also be back for an overnight or two next summer and may try the Fret Creek or Gumjuwac Creek approaches next time.