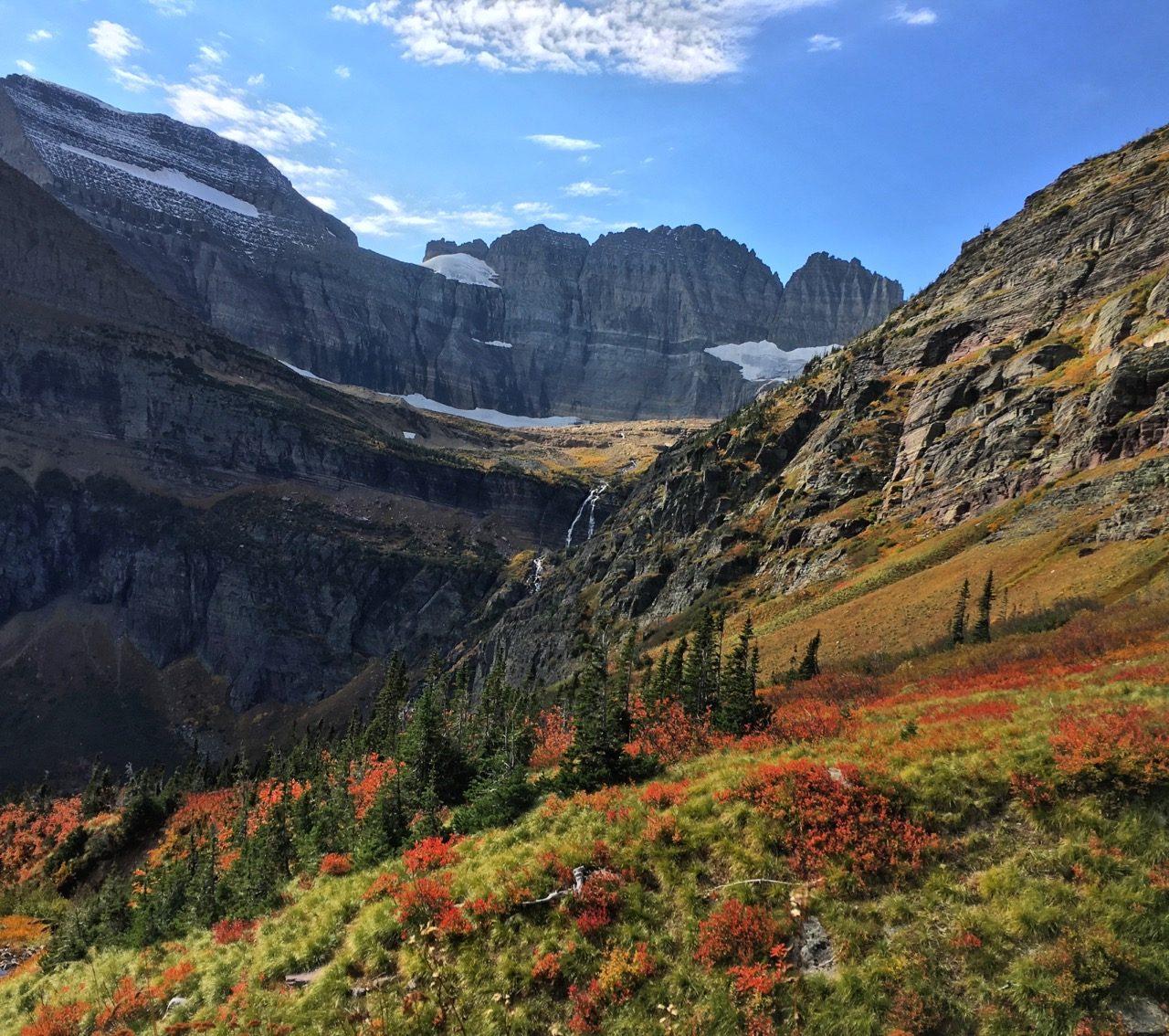 The 5.5 mile (one way) hike up to Grinnell Glacier is one of the most popular in the Glacier National Park. Indeed, the parking lot at the Swiftcurrent trailhead was just about full when we arrived at 10:30 am. Just cars though, no humans.

Earlier that morning, I’d been reading online reports about grizzly bear attacks along the very same trail (2005 and 2010). Before driving 40 minutes to the trailhead near Many Glacier, I insisted that we stop at the St. Mary’s Visitor Center to purchase an 8 oz. can of Counter Assault bear spray with holster ($45) because of the bear warnings posted throughout the park.

The trail shadows the shoreline of Swiftcurrent Lake, then climbs sharply above the long north edge of Lake Josephine. We were alone on the trail for the first hour until we rounded the bend a several hundred feet above the lake. A bull moose was only fifty feet away, it’s rack wider than the trail, walking briskly towards us, bellowing mournfully with each step. Chris turned around and scrambled a very few feet up the steep crumbly rock above the trail, fumbling with the spray canister, safety clip and trekking poles. With great relief, we heard it crash through the brush as it departed the trail just a few yards from where Chris crouched, at what would have been eye-level to the moose. We could hear him continue to moan loudly as he headed toward the lake far below. 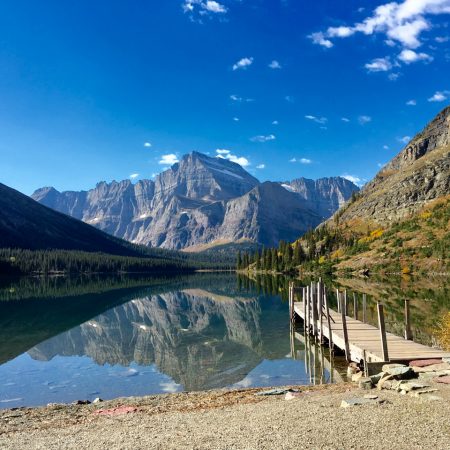 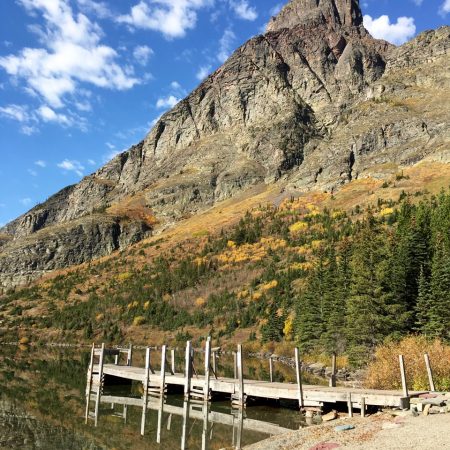 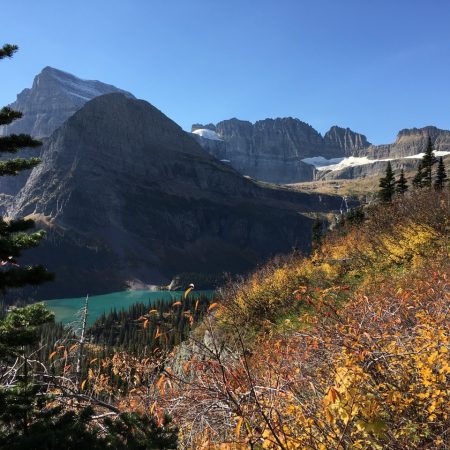 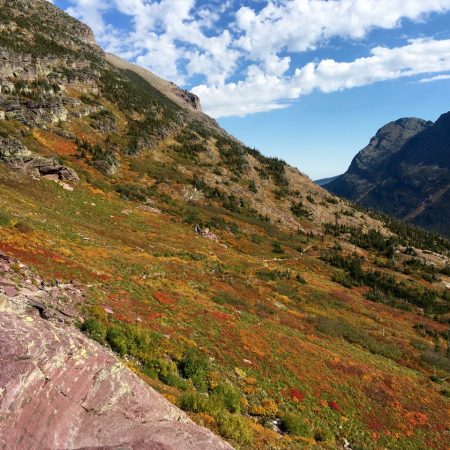 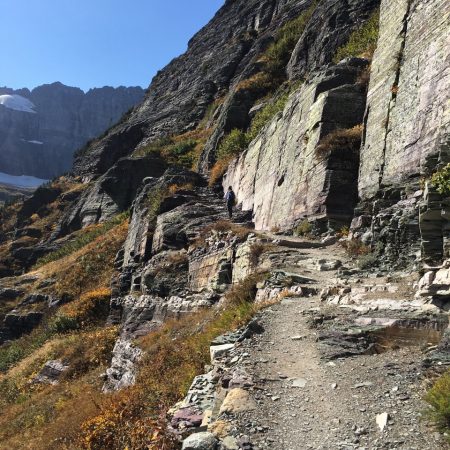 Later, a park ranger told us the noise-making is a normal part of rutting season. A dozen different hikers on their way back from the glacier reported that they’d had to yield the trail to the moose.

We continued to climb steadily for over 2000 feet of elevation gain. About a mile before the final ascent to the glacier, an old-school outhouse and benches gave us a place to rest. From there, we spotted single pure-white mountain goats grazing high up on the mountain sides. Ready for the last leg, we peered over the last hump to find large icebergs floating in the milky green glacial lake. Photos don’t begin do it justice. 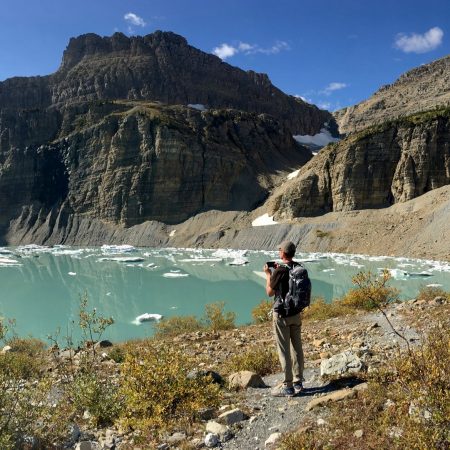 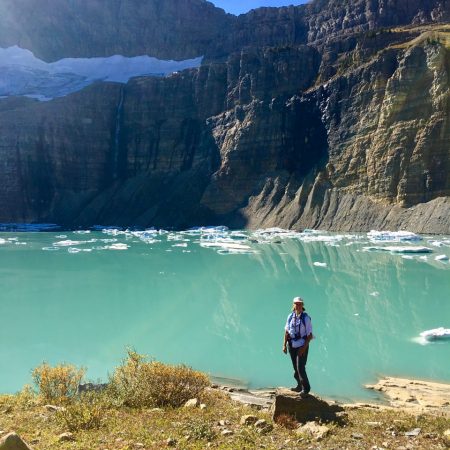 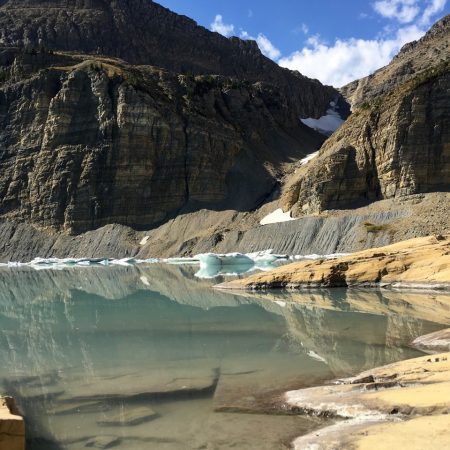 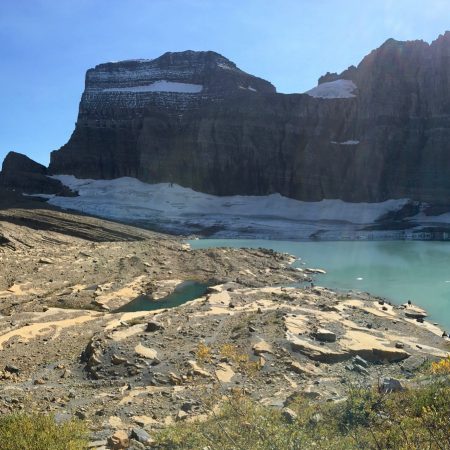 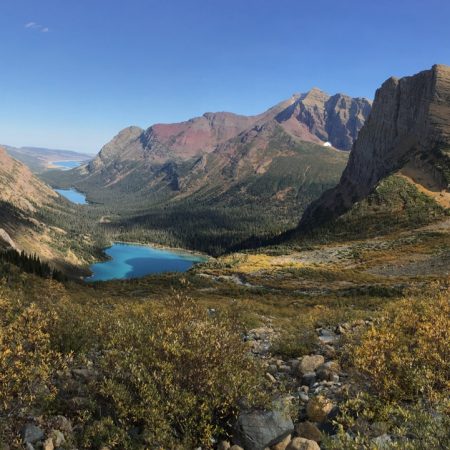 On the way back down, the late afternoon light illuminated the rock walls to the east. We passed a dozen large bighorn rams grazing. A couple of them performed classic head-butting activities which produced loud clacks. One lone ram appeared to serve as a sentry, 25 feet above the trail. When we stopped to take pictures, he approached us with a very stern look in his eye. 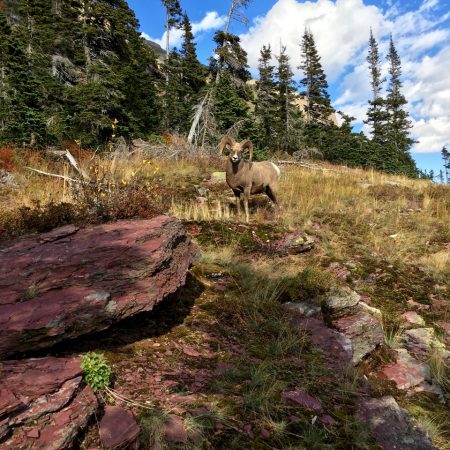 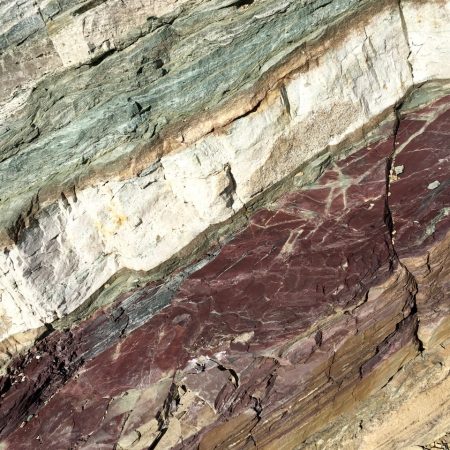 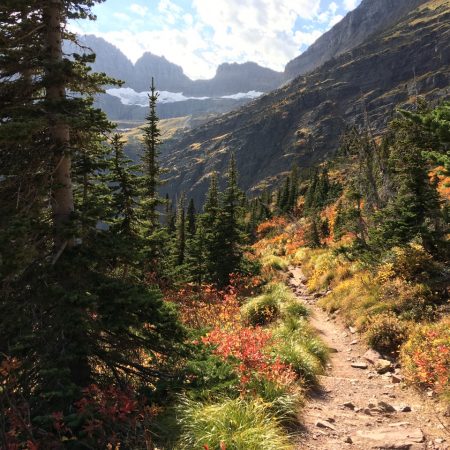 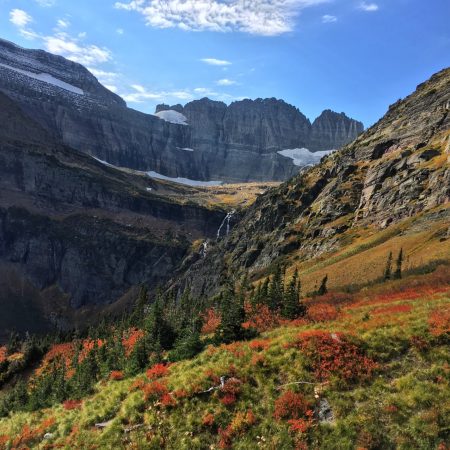 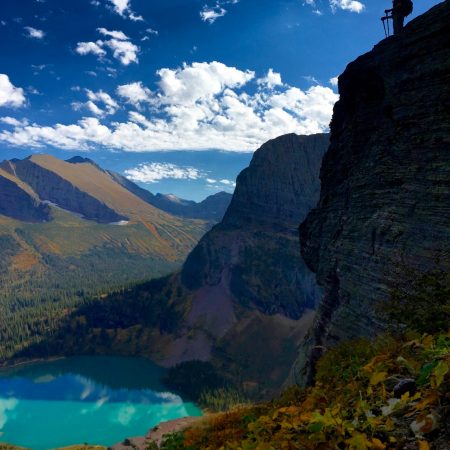 At this point, there were many hikers scattered about along the trail, mostly on their way back down. We rounded a corner and saw two couples stopped on the path in front of us, holding up their hands to be quiet. I whispered “why”? and they pointed…and at the end of their fingertips, we could see the bushes move. Six. Feet. Away. After I unholstered the bear spray, released the safety and tried to breathe, the guy in front motioned that they were ready to take their chances and continue on. That left David at the end, with no spray. We swiftly slinked by the bear whose head was at the same level as my waist. David looked back, locked eyeballs with the bear who was within touching distance. Grizzly.

Needless to say, for the remaining two miles, we tried to stay glued to the four hikers ahead of us, which was really difficult since they were setting at a pace about twice as fast as our normal sauntering style. 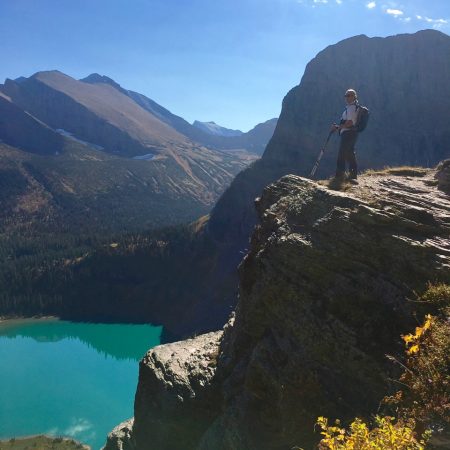 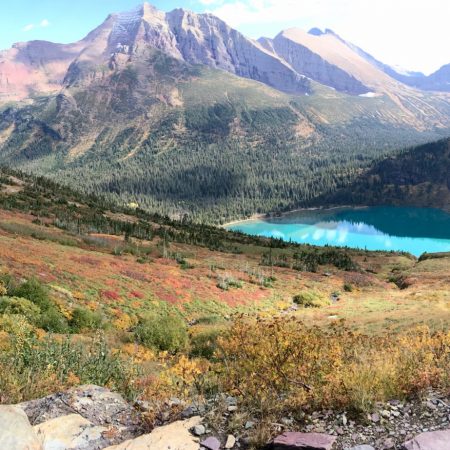 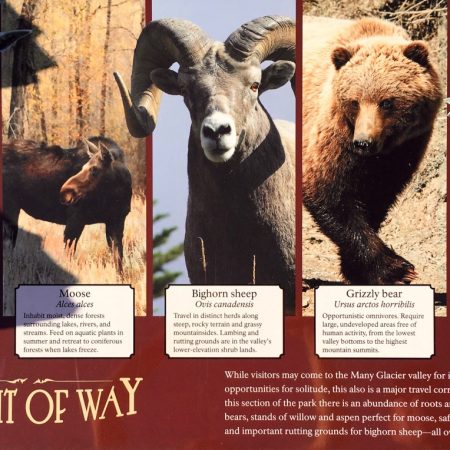 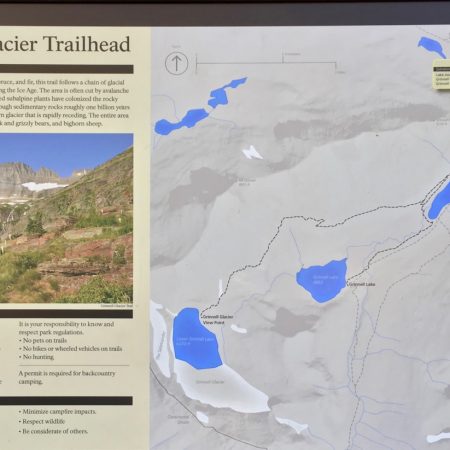 It wasn’t until a couple of days later that David read the stories about grizzly attacks at GNP. He’s admitted that the bear spray was a smart purchase and can we find a can for him, too?