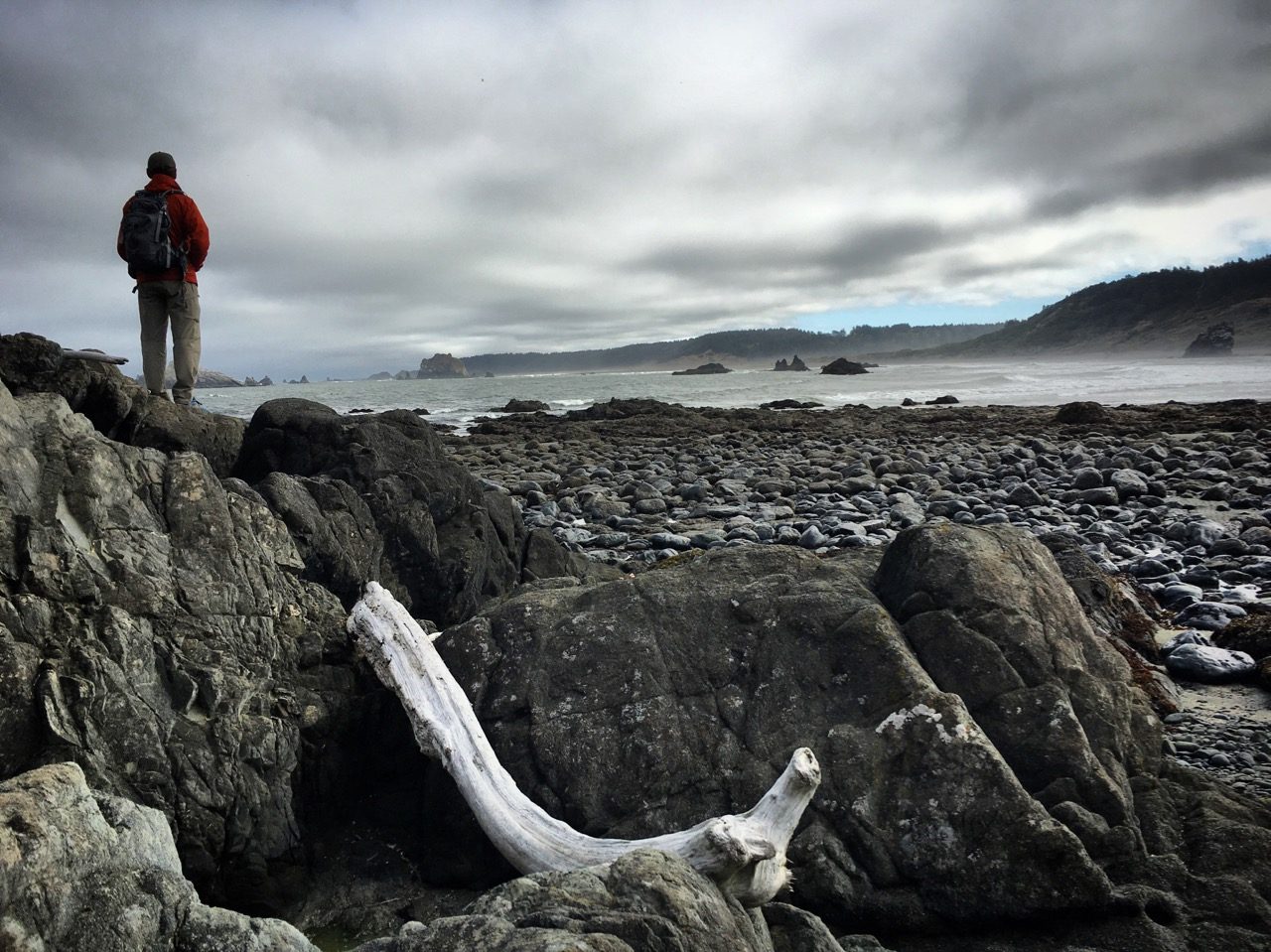 With temperatures forecast to be over 100 degrees in Portland, we decided to escape to the Oregon coast for a week. We had no specific destination in mind, other than to camp at Cape Lookout State Park for the first night. Having gotten a later start then planned, we weren’t completely surprised that all 205 spots were taken on a Monday afternoon. So, with a quick consult on Campendium, we continued south from Cape Lookout along Sand Lake Road, stopping at the three ORV campgrounds to see if there was space available (yes, plenty).

However, Tillamook County’s Whalen Island Campground sounded a bit more intriguing so we drove a few miles further south. Happily, we had our choice of several front row sites along the Sand Lake estuary. After setting up, we took a stroll west, along the low-tide mark in very windy conditions. At the furthest west point, we could see one of the Sand Lake campgrounds across the bay. We returned along the trail through the woodlands for a couple of miles. 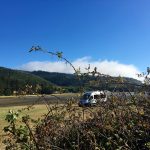 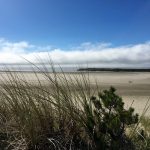 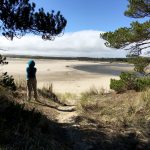 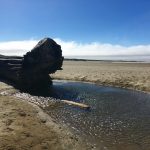 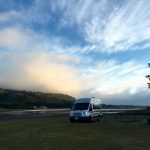 Here’s our view out the back of the van when we arrived (left). Later that evening, the off-coast fog started to seriously roll in (right). 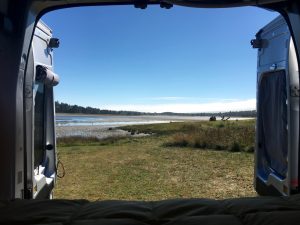 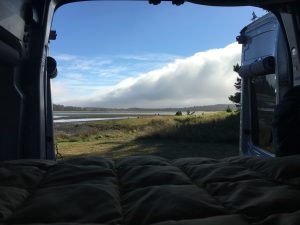 We left early Tuesday to drive directly to our next destination, the Tillicum Beach Campground south of Waldport. This is our fourth time at Tillicum, where we love to walk for miles along the stretch of sand north and south until we’re tired. The southern direction ends at the base of increasingly rugged cliffs where there’s a rough set of steps with an old green patina-d rope handrail heading up the bluff. At the top, the path is officially identified as part of the Oregon Coast Trail which one can walk all the way along the coast from the Washington to California state lines.

In Yachats, the trail winds for a mile or so through a mixed neighborhood of beach houses and hotels, along rocky outcroppings and through hedges sculpted by the winds. It’s truly lovely. On Wednesday afternoon, we eventually found ourselves at the Green Salmon Coffee and Tea House, a vegetarian breakfast/lunch/coffee spot that’s been consistently good. Eight miles later, we were back at the van and settled in for the night.

We departed early Thursday morning and drove three hours south to secure a site at the first-come, first-served Cape Blanco State Park . We felt lucky to get the same sunny spot as last year, so we settled in for what was to become four nights. Every day, we took two hikes out to the beaches far below on either side of the lighthouse, each of which has a distinct personality. We ranged south where the Elk River bisects the beach and watched the sand banks crumble into the fast moving water. On the north side, Castle Beach was littered with gorgeous smooth rocks and agates of various hues and textures. We followed the looping tracks of members of the weasel family, and even got up before sunrise on our final morning to see if we could see the critters in action. Sadly, no. 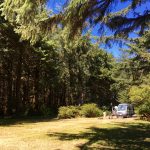 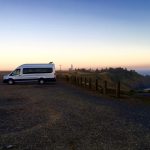 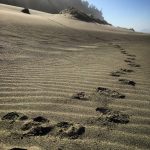 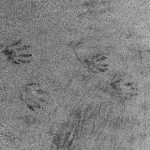 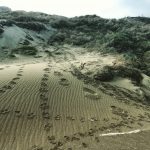 The weather was really variable. The fog would roll in, shrouding the area in a cool, moody blanket. Then it would dissolve and the sun would take over for a while. When the sun shone, we could see that to the south, Port Orford was totally socked in. On two evenings we brought cold beverages and binoculars to a sunny bluff overlooking the ocean and whale-watched for a few hours. The five-mile trail along the bluff and down along the north side became our favorite and led us to where the Sixes River meets the ocean. One of the large rock formations on Castle Beach is a nursery for Brandt’s Cormorants. We watched this year’s large fuzzy fledglings hang from tiny nooks in the vertical rock face, supervised by their inky-black parents. 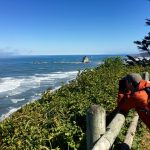 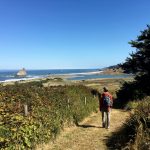 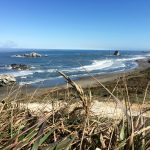 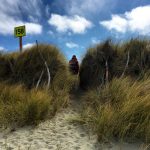 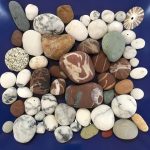 Last year, the Cape Blanco Lighthouse wasn’t open so we made sure to take the tour this time (free with our annual National Park pass). It was neat to learn more about it and to recognize that the 18 seconds between flashes of light is Cape Blanco’s unique light “signature”. 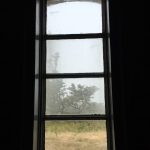 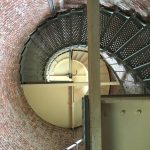 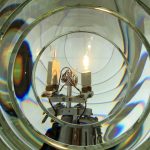 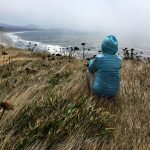 We took a few day trips, one of which was towards Gold Beach. There are all sorts of unmarked waysides that are worth exploring along the southern Oregon coast. Otter Point State Recreation Site was a complete surprise, tucked just north of Gold Beach off of the Old Coast Road. It’s a broad set of sandy cliffs and outcroppings overlooking sea stacks, offering lots of places to explore. Gold Beach also harbors a tiny microbrewery, Arch Rock Brewing, where we sampled three of their excellent brews in what has to be the tiniest tasting room ever. 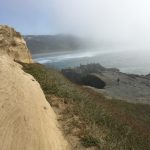 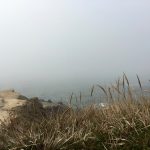 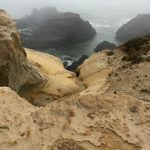 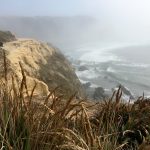 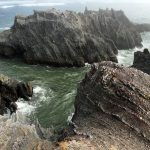 We ventured into Port Orford to try fish and chips at The Crazy Norwegians. True to its Yelp reviews, the service was surly but the cod was excellent. They offered a respectable-looking pie, but it was microwaved which made the crust limp and mealy. From there, we walked down to the beach at Battle Rock and continued south for a mile until high tide forced us to turn back.

Another day, we visited the charming Port Orford Lifeboat Station and Museum and followed the trails along the cliffs overlooking Nellie’s Cove and Garrison Lake. We tried out Griff’s on the Dock, a tiny shack which sits alongside the fishing vessels on Port Orford’s commercial dock. Their fish and chips featured red snapper, they too serve pie, and the service is much sweeter than the cranky Norwegian’s.

On Monday, we stopped for coffee and pastries in Bandon before making the five hour drive home.