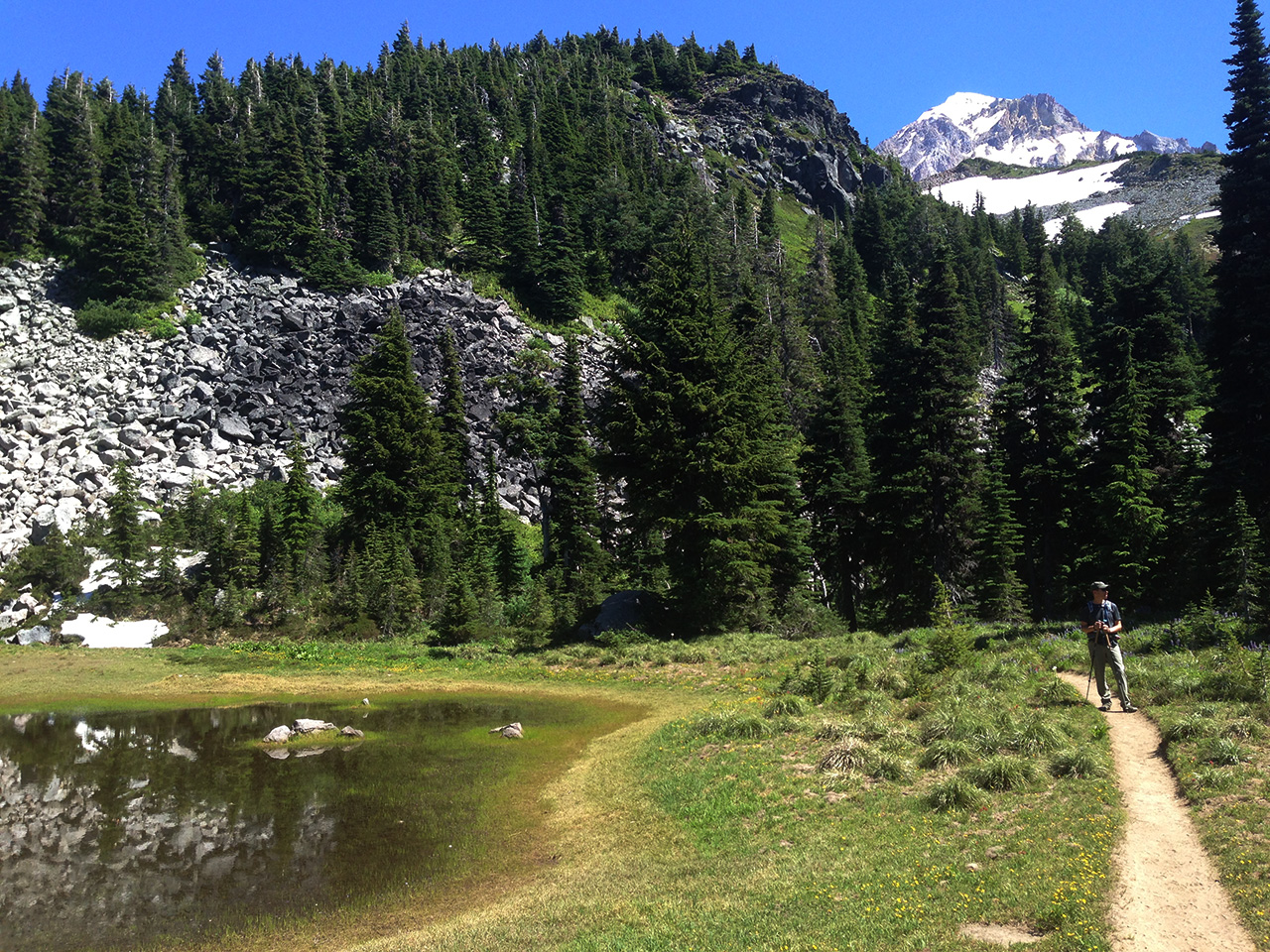 After a donut run to Joes Donuts in Sandy to fuel up and a pit stop at the handsome new Zigzag Ranger District Office, we arrived at the Top Spur trail head at noon Monday. On the weekends, the parking spills out along the road for a long way in both directions, but today we lucked into a spot right at the entrance. We’ve started out here before and hiked down to the Muddy Fork river a couple of times already, but today we went in a different direction, following the Timberline Trail up the ridge to Cairn Basin. We’ve never been bothered by bugs during our hikes, but today’s biting flies were out in large numbers and persistent throughout the day. Fortunately, we had some repellant wipes along, and that seemed to help a bit. Other hikers took to sporting bug-net head gear.

After a short climb on a deep, root-riddled track up and around Bald Mountain, the trail leaves the forest and displays a stunning panorama of Mt. Hood.

After crossing the alpine meadow, it’s back into the trees (and bugs) for another mile up the ridge line. Near the top, we left the trees and were treated to another amazing view of the mountain. 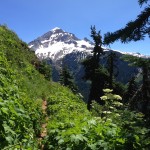 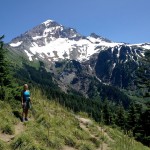 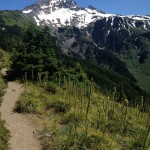 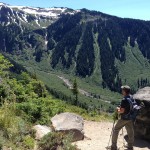 Then the trail turns north along the flanks of the mountain and the views rotate as well to include three of Washington’s volcanic mountains: Saint Helens, Ranier and Adams.

After another mile or two we crossed half a dozen small streams and one more challenging river. I’ll admit the river had me stymied. After watching David jump across some widely-spaced boulders, I just couldn’t see how my short legs were going to perform as well. I tried three different spots and was about ready to call it a day when David suggested lengthening my trekking poles. A lot. Doing so allowed me to plant them in the river much more effectively and we continued on. I’m glad we did as the most scenic parts of the hike were just around the bend.

Boulder fields lined the east side of the trail. Several shallow snow-melt ponds popped up in a series of flowering meadows carpeted with heather, lupine, Indian paintbrush and petite alpine lilies. Sadly, our photos don’t even begin to capture the surprising range of colors and plants thriving along this stretch. We stopped for a short lunch break of Kind bars which we love. 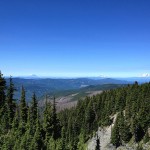 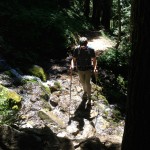 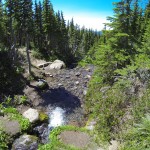 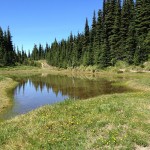 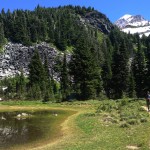 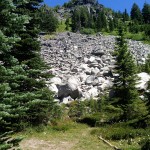 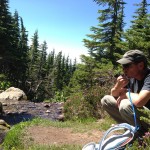 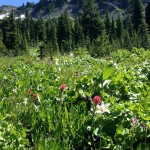 In the distance we spotted the gray burned ridge from the August 2011 Dollar Fire. Eventually the trail took us through the edge of the burn where our destination, the stone Cairn Basin shelter, was located right in the middle of the blackened fir skeletons. Many great camping spots are sprinkled throughout this last mile. 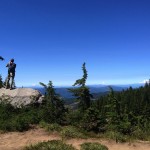 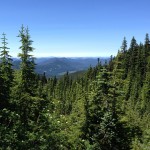 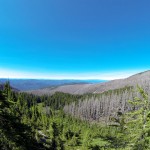 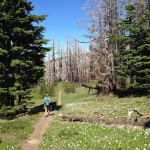 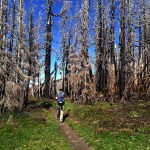 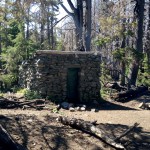 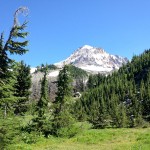 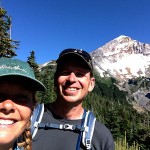 We both agree that this hike offers some of the most varied and dramatic scenery we’ve encountered, all within nine “short” miles: rushing alpine rivers, waterfalls in the valley far below, wildflower meadows, boulder fields, alpine ponds, patchy snow, bear grass glades and the aftermath of a ferocious forest fire. We’ll definitely return to camp overnight.

1. A donut (or two) is NOT lunch. While we’ve noted the positive difference in our energy at the start of a hike after downing donuts, that quickly dissipates and the empty feeling returns. The dreaded Mt. Defiance hike is one of the few we’ve done without donuts or pastry to start our day and we noticed the difference immediately.

2. Don’t slather on scented body lotion. Yeah, next time I’ll skip that. The bugs liked me a lot more than David.

3. Don’t underestimate the amount of water you need. I hadn’t stopped to consider how small my two steel water bottles were, thinking more about how neatly they fit in my Go-Lite waist pack. While I like drinking from bottles rather than the Platypus hose, I’ll probably go back to the Gregory pack and bladder next time. Luckily, when I ran out of water, I was able to dip a liter’s worth out of the cold stream. As I write this 24 hours later, so far so good with no intestinal issues as yet.