We’ve been hearing about the Dog Mountain hike for a few years (a friend of ours said “it’s the hardest thing she’s ever done”). And now that we’ve had a solid week of 80 degree May weather (unheard of in Oregon), we figured the spring wildflowers that this trail is known for would be spectacular.

The trail head is 8 miles east of Stevenson, Washington, an hour’s drive northeast of Sandy and across the Columbia River.  There are two trails (Dog Mountain and Augspurger) that lead off from the gravel parking lot which is right off of SR14. We chose the longer route, the Augspurger (#4407) but they both start off steep and stay that way for a solid 3 miles. 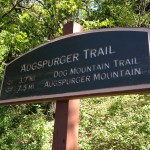 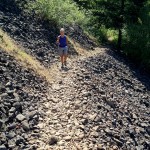 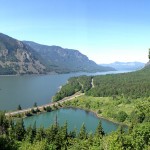 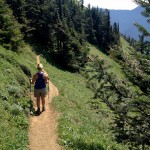 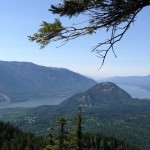 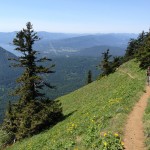 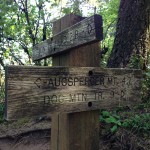 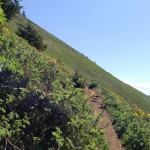 The first mile had a lot of poison oak on the sides of the trail, but the path was wide enough to easily avoid it. At a 1.5 miles the trail cuts through a cool doug fir forest with only a few clear spots to enjoy the amazing eastern views of the Columbia River Gorge. After another two miles, the trail opens up into wide, very steep alpine meadows covered with wild flowers: lupine, pink phlox, tiny wild iris, and vast expanses of yellow balsamroot which grows in clumps and look like stocky sunflowers. It was definitely worth the trudge upward! 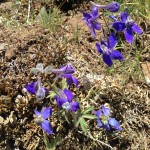 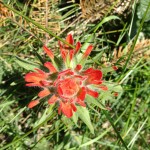 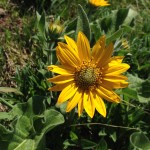 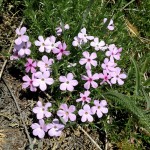 We only met a few people along the first part of the loop, but once we arrived at the Dog Mountain trail and summit, it was like a traffic jam. Several large groups  of hikers and dogs on a well worn path can really take the wilderness out of the experience.

We enjoyed the view at the top for a few minutes, and decided to take the less-traveled Summit Loop trail down to avoid the traffic jams. Overall, the downhill portion was very painful on the knees and hips, as the trails are pitched much more steeply than the ones we’ve hiked in Oregon. We stopped briefly at Puppy Dog Lookout, the site of an old fire lookout that’s since been dismantled. 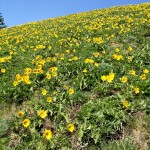 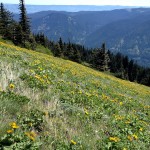 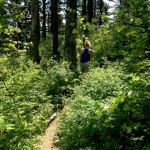 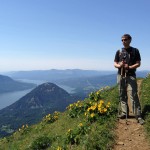 Our GPS indicated that some stretches were at a 22% grade. Oregon trails are engineered and planned to average a 10 percent grade and incorporate many more switchbacks than we encountered on this hike. We’ll have to try a few more in Washington to see if 22% is typical. The elevation gain for this hike was 2880 feet.

Luckily, on the way down, we were able focus on stopping at Walking Man Brewing in Stevenson before heading home. There, we spotted a sign that said “Stevenson Washington, a small drinking town with a windsurfing problem.” How true!